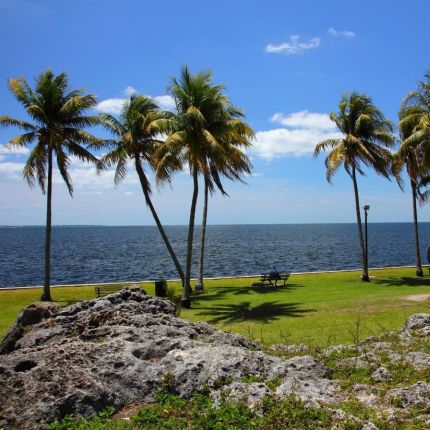 Multimillion-dollar views of Biscayne Bay will be even more glorious for all those who don’t own multimillion-dollar waterfront mansions thanks to the creation of a new public park and refurbishment of a treasured old one.

Pocket-sized Big Hill Park was born with $21,000 in grant money and volunteer labor while 17-acre Alice Wainwright Park is being reborn at a cost of $7 million in bond funds with a new seawall and reopening of the tropical hardwood hammock that’s been a hidden encampment for homeless people for years.

“During the course of the coronavirus pandemic, we’ve used our parks more and grown to appreciate them more,” Miami Commissioner Ken Russell said during a meeting at the Wainwright Park basketball court to discuss improvements. “We’ve got to keep making investments in our parks.”

Big Hill Park was just unofficially christened in Coconut Grove after three and a half years of delays. The 30- by 60-foot plot at the bottom of Royal Road in Coconut Grove has been many things to many people: Serene haven cooled by a constant breeze; fishing spot; gathering place for beer drinkers and pot smokers; and, during the Miami Vice years, drop-off point for drug smugglers. It was shabby and neglected, littered with fast-food bags, soda cans, condoms and the occasional pair of underwear.

Oh, but the vistas. Miami landscape designer Brian Carson had a vision. So he applied for and won a Miami Foundation Public Space Challenge grant in the summer of 2017. The transformation would cost the city nothing. He would draw plans for free and would use the grant to purchase and plant trees, install benches and resurface the area.

But the city’s initial enthusiasm faded during the permitting process. Homeowner Caroline Weiss, who has lived on Royal Road for nearly 50 years and has refused to sell her property to adjacent Ransom Everglades School like her neighbors did, objected to the park, saying it would attract more traffic and more riffraff playing loud music, shooting off guns and leaving trash behind. She said the only solution was one she’s proposed: Close the street and make it private.

“We have lovely parks. That is not a park and is not meant to be a park, and if they try to make it one, I will litigate all the way to the Supreme Court,” Weiss told the Herald last year. “Now it’s the No. 1 makeout-sex spot. Clean it up and who would come? Families? They’re afraid of getting mugged. Joggers? I tell women going by, ‘Honey, don’t run down there alone.’ Rich people? Working people? It’s all the way at the bottom of a 1,365-foot-long street.”

Carson persevered with the support of the Grove 2030 advocacy group and submitted a “Keep Your Promise” petition to the city with more than 1,000 signatures on it. Russell met again with Weiss and the other homeowner on Royal Road and brokered a truce by installing new street lights and assuring them there would be regular trash pickups and police patrols. The stalled project, at risk of losing the grant, was revived.

Over the course of three days, Carson and fellow volunteers, with the aid of True Tree Service, planted 15 sabal palms and 10 multi-trunk silver buttonwoods, set down three monolithic oolite benches and shoveled in 28,000 pounds of crushed gravel.

“Those trees can handle the heaviest winds and the saltwater that floods over the seawall in the strongest storms,” Carson said. “Ideally, a phase two would provide access to the water for kayaks and paddleboards.”

Carson said he’s proud to have contributed a neighborhood park to a city that desperately needs them.

“It’s wild that it took nearly four years to get it done, but we upheld our goals to serve the West Grove community, bring the bay to the public and keep the street from being privatized,” Carson said. “We delivered an extremely low maintenance, resilient and simple project. That space is something special. I’ve met so many nice people. The first time I went I met a couple watching the sunrise. I’ve gotten to know the people fishing there. I see families and kids on bikes.”

About three miles north, where Coconut Grove meets the Rickenbacker Causeway, Alice Wainwright Park, at 2845 Brickell Ave., is finally receiving an upgrade. The park, named after Miami’s first female city commissioner, features magnificent oak trees, a remnant of the Brickell hammock and 1,100 feet of waterfront. It slopes down to the bay past a large outcropping of Miami’s limestone bluff. 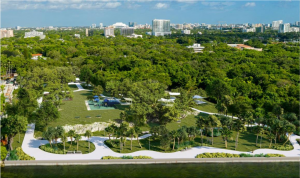 A rendering of Alice Wainwright Park after renovations (IMAGE CREDIT: City of Miami)

Phase One of the city’s improvement project includes construction of a new seawall, which necessitated raising the ground along the water and removing dozens of Australian pines which provided essential shade but were destabilizing the old seawall. They will be replaced by sea grape trees and palms. Packed dirt trails on the lower level of the park will be replaced by walkways covered with synthetic compacted gravel. Russell hopes to connect the park to the Rickenbacker for walkers and runners.

New picnic shelters and benches are on the way, and by the time the project is finished in 2022, the old restroom building will be demolished and replaced. The hammock, which comprises half the acreage of the park, will at long last be open to the public after 20 years behind locked fences.

“It is classified as a Natural Forest Community and home to a rare orchid and a forgotten spring,” Russell said.

That dense portion of the park was closed when neighboring homeowners (Sylvester Stallone and Madonna used to live on the street) complained about homeless people and lewd behavior. The city also said it wanted to preserve the habitat.

Homeless people still occupy the area; there are various holes in the fences. In fact, when Frankie Ruiz and a team of volunteers went in to clean it up a few years ago, they found about 10 tents, some jury-rigged with electrical power running from the Seaquarium’s spinning dolphins sign.

“The team removed old microwaves, mattresses, chairs, Santeria offerings and lots of garbage,” Ruiz said. “We saw invasive growth that has taken over parts of the forest. That shows how little we’ve been protecting it.”

Ruiz, best known as the director of the Lifetime Miami Marathon and Half Marathon, was appointed chief wellness officer for the city by Mayor Francis Suarez. He has a keen interest in parks because he runs through many of them with his running groups and the Belen cross country runners he coaches. He went back into the hammock last week for a tour with Russell, parks department leaders and police — who warned everybody not to get too close to a tent because it was surrounded by a booby trap of knives and scissors.

“I used to go in the hammock as a summer camper and a summer camp counselor,” Ruiz said. “Once the city reclaims it, it’s going to be beautiful, a nice reprieve on a hot day. I look forward to taking my kids where they can feel transported to a forest. It will be a chance for people to see what Miami used to be like. Wainwright should be one of Miami’s great parks but it was let go for many years. The entrance looks like the entrance to a haunted cemetery. It needs to be more inviting because it’s got everything — nature, water views, elevation change, playground, basketball, places to picnic or read, a meet-up spot for bicyclists and runners. I’ve seen people rock climbing on the bluff.”

The fact that the city is finally sinking Forever Bond money into Wainwright Park is admirable, said local activist Elvis Cruz, but he lamented the $7 million price tag. The restrooms could be renovated for much less money. The walkways are too wide and intrusive. Too many trees were removed without proper notice, including some Australian pines that could have been preserved.

“They used the invasive species excuse again — even though many people love the shade of Australian pines,” Cruz said. “Ironically enough, the most invasive and environmentally destructive species of all is Homo sapiens. Should they be removed?”

Cruz criticized the lack of any boating access for the park.

“Wouldn’t it be nice to be able to arrive by boat? Or to launch or land a kayak or paddleboard there?” Cruz said.