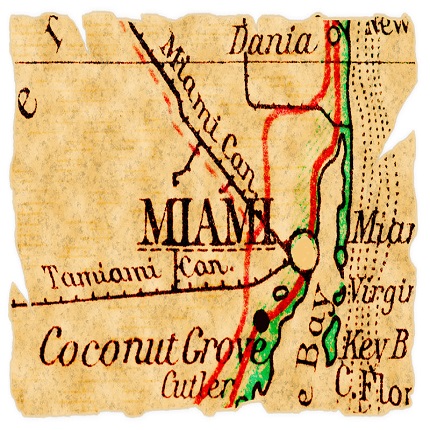 When retail plaza CocoWalk opened in Miami’s Coconut Grove neighborhood in 1990, the three-story, open-air mall was the place to stop for a fro-yo, a fruity cocktail or some khakis. Planet Hollywood, Cheesecake Factory, Gap — big retail tenants all cycled through over the years.

Now, as CocoWalk emerges from a multimillion-dollar renovation and another major mixed-use project, Regatta Harbor, takes shape too, they signal a pivot away from flashy consumerism, and an embrace of the waterfront neighborhood’s history.

The area was settled by Black immigrants from the Caribbean and Whites from the Northeast.

In the early 20th century, the U.S. Navy dredged and engineered the small island of Dinner Key to connect it to mainland Coconut Grove, and built an air station. That was taken over by PanAm airlines from 1931 to 1946. One of its buildings later became Miami’s City Hall.

In the 1960s and ’70s, Coconut Grove was known for its bohemian vibe. Singer Jim Morrison of The Doors was famously arrested during a concert at a hangar-turned-convention center there.

The neighborhood still has one of the highest tree canopies in the city, but in the past few decades, numerous luxury condos and slick multimillion-dollar homes have popped up, which have led to tensions over gentrification and provided a built-in clientele for retailers.

The architects opened up the plaza to the street to be more inviting to passersby. They also added warm touches, like a new five-story terra cotta office building that replaced 50K SF of former retail space. A 60-foot kapok tree was planted in the heart of the plaza, with hanging vines and a rooftop garden for the office tenants. Added seating welcomes people to relax and read a newspaper or scroll through a phone.

CocoWalk is owned by a joint venture between publicly traded REIT Federal Realty Investment Trust, and Miami-based Comras Co. and Grass River Property. They paid $87.5M for it in 2015, according to the South Florida Business Journal. 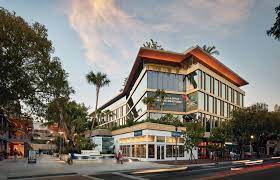 “The retail that was very much in vogue 20, 25 years ago with the Gaps and Victoria’s Secrets of the world… have become a thing of the past,” Comras said. “If we felt that the tenant was relevant for the mix that we’re creating, we would work with them and bring them back. I think the Gap is a great brand that just wasn’t appropriate for CocoWalk. The idea of the merchandising within CocoWalk is to really make it a day in the life of somebody in Coconut Grove. Shoppers can work out at a YouFit gym in the morning and office tenants can step out for lunch at Sushi Garage or Sweetgreen. We provide for all the kids when they’re done with school. We have The Spot barbershop right next door to the School of Rock music school, next to a sneaker store. A gourmet market is going in. At night, the focus shifts to bars and restaurants. We tried to really cater to the family, and to the daily lifestyle needs of the consumers.”

By basing rents on what a tenant can reasonably afford, he was able to accommodate an ice cream shop. He offered flexible lease terms to nascent brands that he thought would be a great fit, like Free People Movement, which sells women’s workout clothes.

Blocks away, on nine-and-a-half waterfront acres in the Dinner Key section of Coconut Grove, another mixed-use destination, Regatta Harbour, is being developed by Miami-based TREO Group with a focus on outdoor dining, events and entertainment. 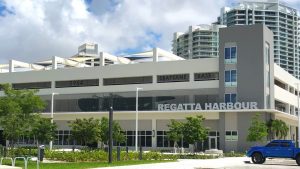 The project includes a freshly completed marina with dry storage slips and floating docks, and it invites pedestrians along a bay walk with courtyards. Shoppers can arrive by car, boat or the Coconut Grove trolley system, which connects to other parts of Miami.

The retail portion of the Arquitectonica-designed project is slated to be completed this year and will preserve and restore some of the historic airplane hangars. One will become marina storage and a second, 20K SF hangar, a gourmet food hall and entertainment concept.

Already, a high-end Anatomy gym has moved into 14.5K SF of the plaza’s 100K SF retail space and a 542-space parking garage designed by Wolfberg Alvarez & Partners has opened. A “boat-to-table” restaurant by Top Chef winner Jeremy Ford is planned.

TREO Group principal Eddie Garcia said via email that his team, too, curated its tenant mix and aimed for a round-the-clock experience. As retail struggles nationally, he has seen opportunities with local companies that are popular and can expand. For example, Regatta Harbour is Anatomy’s third location.

“As migration from the urban core to suburban town centers continues to transcend, individuals emphasize ‘live, work, play, gather’ concepts,” Garcia said. “With this in mind, developers must rethink how we socialize, focusing on outdoor spaces with ample greenery and seek to incorporate enhanced safety measures as well as touchless technology into design.”

According to a Colliers retail report for Q1 2021, Miami-Dade County had an overall vacancy rate of 4.6 percent. Asking lease rates in the county are $36.99 per SF, an increase of 1.9% from the prior quarter. In Coconut Grove specifically, that figure is $43.58.

“We wanted to make it the living room of Coconut Grove,” said Larry Beame, principal at RSP Architects, who redesigned CocoWalk. “It’s very pedestrian. It’s one of the few neighborhoods that really has a soul.”