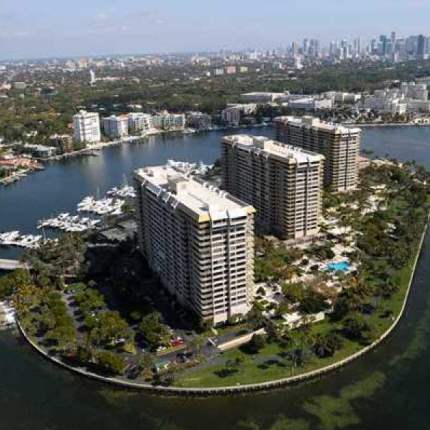 Just off the shores of Bohemian Coconut Grove, on a private, 20-acre island, developer Eduardo Avila wants to build new luxury condos, a restaurant, golf simulator, and other amenities where 80s-era tennis courts, tiki huts and a wedding-destination resort and spa sit today.

But first, he’ll have to go to war with the Grove Isle natives.

On Wednesday — about two years after Avila’s various companies purchased and took control of nearly half the island — a group of residents filed a lawsuit to stop his project at 4 Grove Isle Dr. and accused him of vindictively shutting down their slice of paradise. Their lawsuit comes just days after the developer filed his own lawsuit against the city, and follows the island’s condo association’s suit against the developer.

The complaint filed Wednesday by Preserve Grove Isle LLC says the developer, who owns the club that runs island amenities, has become so infuriated by the opposition of residents living in Grove Isle’s three condo towers that he has closed visitor parking lots, and is now shuttering Grove Isle Hotel & Spa, the tennis courts and pools at the end of the month. They say that violates a covenant attached to the land, created after the island’s original developer became tangled in his own legal battles with the city.

“It’s all a power play,” said Glen Waldman, attorney for Preserve Grove Isle. “[Avila] is not getting what he wants. He’s frustrated. And he’s trying to fight this battle as a means to get everybody to submit to him.”

Avila’s development plans — which wrap along the north and east bank of the oval-shaped island — have changed over time. On its website, Preserve Grove Isle says he first wanted to build an 18-story tower. Now, the developer is proposing two five-story buildings and new amenities.

Avila’s Grove Isle Associates filed his own lawsuit Friday, demanding that Miami’s zoning administrator issue the waiver and allow him to begin tearing down the old and building the new. That’s why the developer says the resort is closing at the end of the month for renovations.

In an email, Shubin said the suit by Preserve Grove Isle incorrectly asserts that the developer can’t rebuild the island’s amenities, and said the developer is offering alternative club space at the Biltmore Hotel, several miles away in Coral Gables.

“This is really an attack on our client’s as-of-right plan under Miami 21, which did propose a new club on the island,” Shubin wrote. “[It] exposes how the few residents who formed this group really don’t want another inch of development on the island despite the zoning rights, which our clients clearly possess and which the City has already acknowledged.”

The sudden string of litigation comes at an intriguing time, with the campaign for Miami’s District 2 commission seat, which represents Coconut Grove, heating up. The condo association at Grove Isle hosted a candidate’s forum last week. They also hired lobbyist Steve Marin late last year to represent them. Marin is close with District 2 Commissioner Marc Sarnoff and running the campaign of Sarnoff’s wife, Teresa, who is running for her term-limited husband’s seat.

Commissioner Sarnoff said Wednesday that the dispute between the developer and island residents—rooted deep in documents crafted decades ago —should be meted out by the courts.

Whatever happens, Waldman said his clients will defend their homes from over-development.

“They’re not going to sit down and let this guy destroy their slice of paradise,” he said.