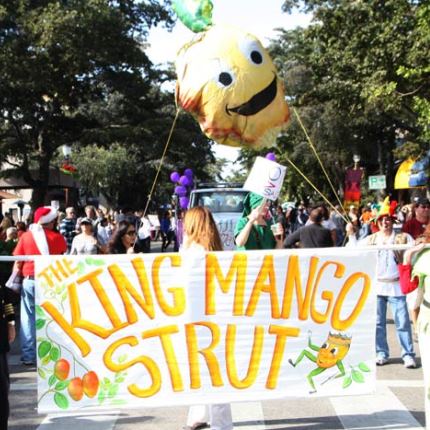 It is an annual parade that snakes through Coconut Grove on the last Sunday of each year.

For over 30 years, Miamians have kept the tongue-in-cheek parade alive with satirical costumes, marching bands and floats, usually with a facetious focus on local, national and global events from the last year. The parade also features actual marching bands, such as the New Orleans Funeral Marching Band and local high school marching bands, and local groups like the Grove Jugglers and the Coconut Grove Hare Krishna spreading their love. The King Mango Strut takes pride in being an all-inclusive, free event.

The silly and rather strange parade was conceived in 1982 by two Coconut Grove residents, Glenn Terry and the late Bill Dobson, after being denied entry to the Orange Bowl Parade. The reason for the snub? “Unsuitable instruments” such as kazoos, conch shells, and garbage can drums. Terry, Dobson and their satirical band of Grovites, the Mango Marching Band, decided to create their own parade in their neighborhood, and the King Mango Strut was born. The parade was an instant hit in the bohemian Coconut Grove community, with locals constantly pushing the boundaries of good taste with hilariously irreverent costumes and signs, many of whom choose to use local and state politicians as the butt of their jokes. The King Mango Strut isn’t entirely in jest though, there are serious titles handed out and every year the parade features a float packed with young boys and girls, all carrying the titles of Little Miss Mango and Little King Mango.

An All Day Affair

The parade begins at 2 p.m. and is an all day affair for downtown Coconut Grove, providing local shops and restaurants with an economic boost from the 8,000 to 10,000 parade watchers and participants each year. It is a completely free, all volunteer and non-commercial event, put together by King Mango Productions, a 501© non-profit organization. Recently, in a move in line with the parade’s culture of inclusion for all, the King Mango Strut put its Grand Marshall title up for auction, allowing the public to bid on who will lead the unusual and fun spirited parade.

The King Mango Strut is a can’t-miss event, taking place during one of the nicest times of the year for Miami, late December. Take the day to stroll through Coconut Grove in the crisp, cool weather, have brunch at one of the beautiful outdoor cafes and watch residents from Miami’s most colorful neighborhood make fools of themselves for big laughs. The streets line with locals and visitors alike who share in this fun time and community building event. You’ve never seen anything like the King Mango Strut, where wacky costumes and huge smiles are required.