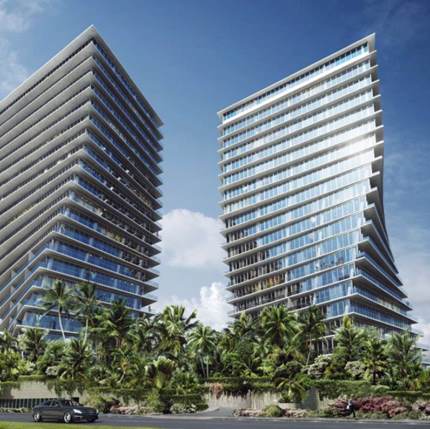 Construction has finished at the two, twisting towers rising on South Bayshore Drive in Coconut Grove — the first new condo towers completed in the neighborhood in 10 years.

The project’s 98 units are sold out, with the exception of a penthouse listed at $28 million, according to developer Terra. More than half of the units went to domestic buyers, the developer said.

Grove at Grand Bay was designed by well-regarded Danish architect Bjarke Ingels, his first project in the United States, with landscaping by Miami designer Raymond Jungles. Asking prices ranged from $1 million to $15 million.

“A sanctuary for artists, writers and unconventional thinkers, the Grove has a long history of challenging the status quo – much the same way Grove at Grand Bay is changing the way Miami thinks about design,” Terra president David Martin said in a statement.

The completion is a milestone in Coconut Grove’s resurgence in commercial and residential development.

The 20-story glass towers have addresses at 2675 and 2669 S. Bayshore Dr. Terra said Grove at Grand Bay set a Coconut Grove record with an average sales price of $1,100 per square foot.

The company is developing another luxury project nearby called Park Grove, as well as aRenzo Piano-designed project at the northern end of Miami Beach.

Only a few deeds for Grove at Grand Bay units have hit public records so far. More deeds will be filed later in the week, according to Terra.

Among the buyers are the founder of a Miami-based parking company, an executive at a local financial firm, and a member of a Venezuelan manufacturing family. Those units sold for between $765,000 and $2.1 million.