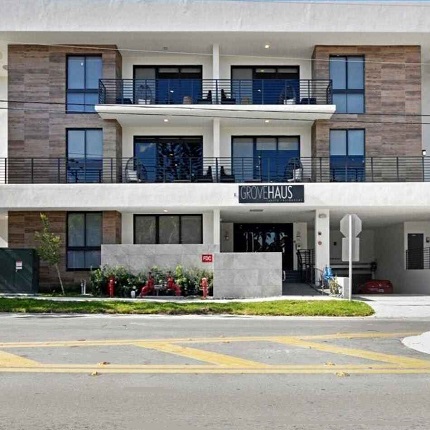 Metronomic once had grand plans to redevelop a large area of Coconut Grove. Now it might lose its only completed project there.

Four years ago, the Coral Gables-based developer announced a $74 million mixed-use project in the neighborhood, with nearly 300,000 square feet of apartments, retail, offices and a hotel. But it soon became saddled with debt, filing for Chapter 11 bankruptcy in 2020 and losing 17 of its properties, none with completed projects, in a foreclosure auction last year.

If it can’t come up with $7.9 million in the next few weeks, Metronomic’s only finished Coconut Grove development, the four-story GroveHaus apartment building at 3265 Bird Avenue, could meet the same fate.

An auction for the property is set for Oct. 12, court records show. Metronomic can keep the property if it pays its debts no later than five days before that date. The deal, hammered out in a court-approved settlement, is the latest in a two-year saga over the 10-unit apartment building.

In 2020, Wilmington Trust sued Metronomic affiliate GroveHaus LLC to foreclose on a $5.8 million mortgage provided the prior year, according to the complaint. The suit also was against Metronomic’s Kelly Beam, who leads GroveHaus and guaranteed the loan.

Under the terms of the settlement between Wilmington and GroveHaus, the auction was postponed to Oct. 12, court records show. If GroveHaus makes the $7.9 million payment by Oct. 7, Wilmington can’t pursue the developer for additional funds.

Last week, Isicoff approved the Wilmington and GroveHaus settlement. Attorneys for GroveHaus, Beam and Wilmington did not return requests for comment.