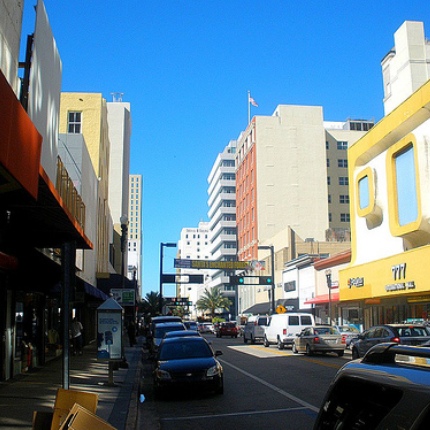 But these days, the block is not taking advantage of the feverish condo development that brought thousands of new residents to the downtown area over the last decade. The streetscape and many of Flagler Street’s stores need a serious facelift following years of neglect.

A partnership between private property owners, the City of Miami and Miami-Dade County wants to restore Flagler Street to its 1950s and 1960s glory through a $12 million improvement plan, the Miami Herald reported. South Miami-based Curtis + Rodgers Design Studio designed an overhaul that would get rid of on-street parking to make way for valet stations. Sidewalks would be extended to give more room to pedestrians, restaurant tables and bike racks.

In the works for three years, the plan is overseen by Miami’s Downtown Development Authority. Flagler Street stakeholders agreed to a special assessment of about $1 million to help fund the project. The city is covering between $5 million and $6 million, while the county is kicking in up to $6 million from unused bond revenue.

A project start date has not been determined.