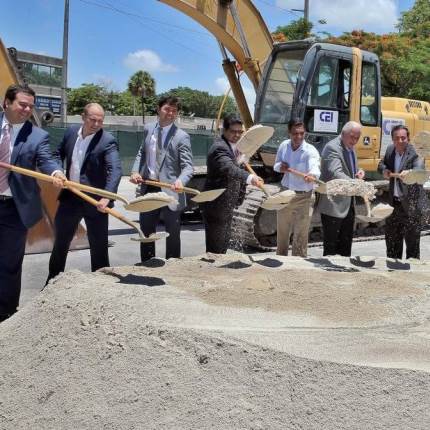 Two-and-a-half years after the city of Miami closed Douglas Park, officials have announced the start of a decontamination project.

City officials said Wednesday they expect the park, 2795 SW 37th Ave., will reopen to the public in December.

Douglas Park is situated on 10 acres near Coral Gables.

“The closing of this park sparked the largest number of reactions by residents. I got a lot of calls and complaints, people came to my office to ask when the park was going to reopen,” Miami Mayor Tomas Regalado said after a ceremony at Douglas Park to announce the decontamination project.

Beyond its recreational activities, the park served as a voting center for nearly 20 years. Its community center also served as a meeting place for many neighborhood organizations, Regalado added.

In a second phase, Douglas Park will get a new community center by October 2017. The rest of the park will reopen this December, said Jeovanny Rodríguez, director of the city’s Capital Improvements and Transportation Department.

“Our priority is for the park to be safe again so the community can visit it,” Rodríguez added. The cost of the cleanup and reconstruction at Douglas Park will total about $8 million.

“Residents should be proud, because they fought a lot to improve this park,” Miami Commissioner Francis Suarez said Wednesday.