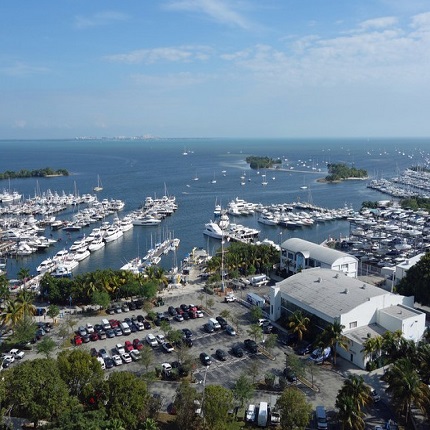 More than 20 months after Hurricane Irma tore up Dinner Key Marina, the City of Miami is ready to bring the marina back to its former glory at a cost that could exceed $22 million.

On the August 23rd agenda, city commissioners were to consider hiring a company to repair and rebuild the marina, located on the waterfront in Coconut Grove, surrounding historic Miami City Hall.

Before Hurricane Irma, Dinner Key Marina was the largest wet slip marine facility in Florida. City administrators estimated that the powerful storm destroyed 60% of the dockage.

Asked for a comparison of occupied slips at the marina, city staff said at the start of 2017 about 580 vessels were docked there, with about 250 recorded there in early 2018. City officials hope the bulk of the repair work to fix storm damage will be reimbursed by the Federal Emergency Management Agency, or FEMA.

The Office of Capital Improvements is asking the commission today to accept a proposal from Kearns Construction Co., the sole lowest responsive proposer, to provide design-build services for the Dinner Key Marina Repairs and Restoration Project for $16,880,381 for the scope of work, plus Additive Alternatives No. 1, and No. 3 through No. 8, in the amount of $3,919,619, plus an owner’s contingency allowance in the amount of $1,688,038, for a total not-to-exceed award value of $22,488,038, on a phased basis.

City staff worked for months to prepare the request for proposals, which was issued Nov. 7, 2018. A background memo says the scope of work consists of restoring or replacing the docks and utilities that Hurricane Irma damaged at Dinner Key Marina in September 2017.

The goal is to efficiently return the marina to operating conditions with restoration or replacement of fixed concrete and timber dock structures, a fire protection system, shore power, lighting, sewage pump-out, domestic water and a communication/security system.

The scope is divided into “hurricane” and “non-hurricane” repairs. Line items are included for optional improvements for mitigation purposes. The memo says that by Dec. 6 the city’s procurement department had received three proposals in response to the solicitation, from Dock and Marine Construction Corp., Marina Utilities Inc., and Kearns.

By Jan. 25, procurement completed an extensive review and due diligence on all three proposals following guidelines in the solicitation. Dock and Marine and Marine Utilities were found to be non-responsive to the conditions in the request for proposals and therefore were disqualified from the selection process.

Then on Jan. 31, an evaluation committee completed the Step 1 evaluation and ranking of the proposal by Kearns. On March 26 the committee evaluated Kearns’ Step 2 technical proposal while receiving a formal presentation by Kearns on the proposed solution for the project, following the guidelines in the solicitation.

The proposed resolution notes that due to the project being executed in three phases, the city manager will have delegated authority to issue Kearns the appropriate notices to proceed for each phase, once the previous phase has obtained a temporary certificate of occupancy.

The legislation also says $22,488,038 is to be allocated from the city’s General Fund, Florida Inland Navigation District or FIND, sanitary sewer bonds, and “other additional legally available sources of funding yet to be determined.”