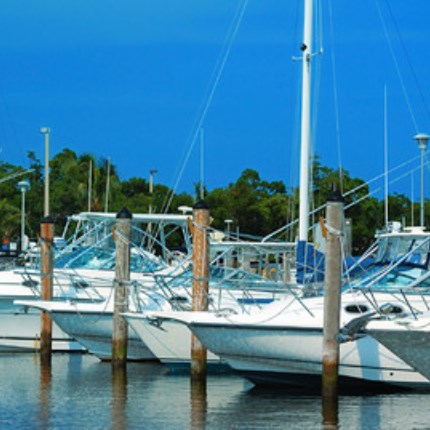 Dinner Key Marina, which hugs the Coconut Grove waterfront and historic Miami City Hall, is in the midst of a multi-million dollar rebuild and City of Miami officials anticipate completion of the three-phase project in mid-2021.

The municipal marina, owned and operated by the city, sustained serious damages when Hurricane Irma hit the area on Sept. 10, 2017.

Before the powerful storm, Dinner Key Marina was the largest wet slip marine facility in Florida. City officials estimated that 60% of the dockage was destroyed.

“The project is under way repairing the damages caused by Hurricane Irma. The project is in its first phase that includes the demolition of the damages (current work) and repairs of Piers 1, 2 and 3,” said John Heffernan, deputy director of the city’s Office of Communications, in an email response to Miami Today.

“We anticipate this phase to be complete in the fall of this year. Phase 2 and 3 will repair the remaining Piers 4-7 and the shoreline piers. We expect completion in mid-2021,” he wrote.

The repair and restoration contract wasn’t approved by the city commission until May 2019, when it accepted a proposal from Kearns Construction Co. to provide design-build services for the marina, knowing the cost of the work could exceed $22 million.

City officials were hoping the bulk of the repair work to fix storm damage would be reimbursed by the Federal Emergency Management Agency, or FEMA.

The total project cost is now $22.9 million, according to Mr. Heffernan.

Funds to cover the work are expected from several sources:

Mr. Heffernan said the city is pursuing additional grants to cover the remaining funding needed and the city’s matching requirements.

City staff worked for months to prepare the formal request for proposals to repair and rebuild the marina, which was issued in November 2018.

According to a background memo, the project consists of restoring or replacing the docks and utilities that the hurricane damaged.

The overall project goal is to efficiently return the marina to operating conditions with the restoration or replacement of the fixed concrete and timber dock structures, fire protection system, shore power, lighting, sewage pump-out, domestic water and communication and security system.

The number of vessels calling the marina home has gradually increased since the storm.

“At this time last year, the total was approximately 350, taking into account ongoing repairs and available space at the time,” said Mr. Heffernan, of early 2019.

“There are currently 394 vessels based at the marina (398 slips/mooring spots total),” he wrote.

While some commissioners last year considered switching management and operations of Dinner Key Marina to a private company, that proposal has calmed for the moment.

“There are no plans for a private operator at this time,” wrote Mr. Heffernan, in response to a question from Miami Today.

In its quest to hire a company for the repairs and restoration, the city offered a history of the popular Grove waterfront and the marina at 3400 Pan American Drive.

“The area along Coconut Grove in Biscayne Bay has a long history of waterfront use beginning with the Naval Air Station in 1918, and with the Pan American Seaplane Terminal from 1932 to 1945. The original terminal building is still utilized as City Hall,” the document reads.