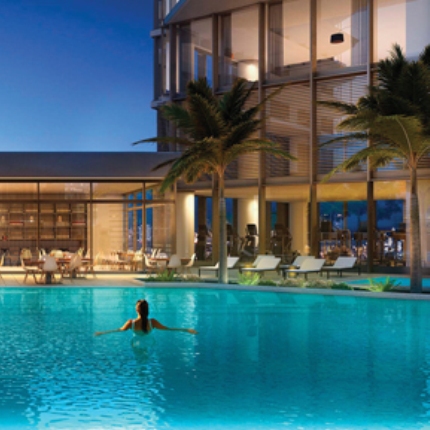 To give prospective buyers a taste of what life will be like at the luxury high-rise One River Point in downtown Miami, developer KAR Properties brought in Mariela Dobreva, a specialist in creating lavish vacation itineraries for A-listers such as Richard Gere, Jennifer Lopez, John Legend and Chrissy Teigen. She’s also worked with global royalty, coordinating amenity packages at five-star hotels for Tamim bin Hamad Al Thani, the emir of Qatar; Felipe VI, king of Spain; and Mohammed VI, King of Morocco.

Hired as the 60-story project’s “lifestyle curator,” the Bulgarian native is part of the sales pitch that highlights her role in making sure future One River Point residents don’t ever have to worry about planning their social calendars and vacation getaways. She’ll do it all for them, Dobreva said in a recent interview.

“Our aim is to create a boutique luxury lifestyle and a five-star hotel culture in a residential building,” Dobreva said. “We will even provide these services before a reservation is converted to a sales contract, so they can experience what we are aiming to create here.”

Just don’t call her a glorified concierge. “It is totally different from what they do,” Dobreva said. “We are not just assisting with restaurant and theater bookings. We take it to the next level.”

In the ever-competitive chase for buyers in Miami’s oversupplied luxury condo market, developers are resorting to all manner of tricks to create an opulent, tech-savvy lifestyle that will give them an edge in landing sales contracts. Other firms are trying out programs similar to the one Dobreva runs. Property Markets Group, which recently finished the 180-unit Echo Brickell, has an in-house “brand and human experiences” director whose job is to oversee technology, amenity programming and social-event planning.

The company also teamed up with Deepak Chopra for an experimental concept in which the New Age guru will design seven out of 68 units at the proposed Sunny Isles Beach high-rise Muse with holistic elements including circadian lighting and water filtration systems.

Other builders, like Habitat Development, are banking on their offerings of fully furnished units with built-in state-of-the-art technology, which buyers are permitted to rent out via Airbnb and other home-sharing platforms. This is a shift in approach — at the height of the current cycle, developers usually wrote up condo documents that severely restricted buyers’ ability to rent units for less than 12 months. Now, as the demand for home-sharing rentals has skyrocketed and condos languish on the market, some builders see the value in working with Airbnb and similar companies in order to entice buyers with the promise of a rental income.

“There is a demand for this type of product that is being fulfilled by some developers,” said John Reza Parsiani, Cervera Real Estate’s vice president for business development. “Before, that wasn’t the case. It was hard to even find projects that would allow rentals on a month-to-month or bimonthly basis.”

Parsiani and other brokers interviewed said lifestyle curators, tech and health gurus and others of that ilk help close deals in the fickle luxury market. “Most affluent and well-traveled clients now want these services at their fingertips,” Parsiani said. “If a developer can include them in the purchase of a unit, it makes it that much more desirable.”

In particular, developers who add holistic elements to a building are doing very well, Parsiani added. “Buildings focusing on that kind of a lifestyle make a huge difference,” he said. “Instead of having to get in their car to drive 30 minutes to get to their meditation or yoga studio, the buyer can have it brought to their doorstep.”

Darin Tansey, sales director for the Tansey Group at Douglas Elliman, agreed that buyers are looking at a building’s lifestyle components when shopping for condos. In a market with an abundance of inventory, being able to offer over-the-top concierge services and state-of-the-art technology is critical, Tansey said. “A strong number of buyers with capital to disperse want the luxurious South Florida lifestyle,” he said. “People want all these bells and whistles to go along with a beautiful residence.”

For instance, the Ritz-Carlton Residences Miami Beach doesn’t have a lifestyle curator on staff, but the property will have the five-star brand’s elite concierge services combined with access to modes of local transportation tailored for the jet set, Tansey said. His group is handling sales for the 111-unit project being built by Lionheart Capital.

“We have a helicopter that lands on a floating helipad, and then a unit owner can get on a boat that whisks them to their building,” Tansey said.

The project will also have a Frauscher, an Austrian luxury motor yacht, in its 36-slip dock for residents to charter. “It’s like a Ferrari on water,” Tansey said. “The Frauscher comes with a butler, and residents can take it out for half a day on Biscayne Bay.”

To enhance the living experience at Property Markets Group properties, Brian Koles, the company’s brand and human experiences director, manages a team that is responsible for creating social activities for unit owners and tenants. “Our residents want the most ‘Instagrammable’ life possible,” Koles said. “We get the VIP access to the best events like the SoBe Food and Wine Festival. We can set up a massage on the beach rather than inside their unit. We can get them inside the cockpit of a race car.”

PMG also looks to get a leg up on competitors by incorporating smart technology with trendy activities. A part of that initiative is the partnership formed in early 2017 with Chopra and his company Delos to equip health and wellness features into a handful of unsold condos at Muse, a luxury tower in Sunny Isles Beach that PMG is co-developing with S2 Development.

And at PMG’s Echo Brickell, a 57-story building at 1451 Brickell Avenue that opened in November, the company is testing out a mobile application that “pretty much gives residents control of their units and concierge services in the palm of their hands,” said Koles. Using the mobile app, they can order flowers for their residence, schedule a handyman to fix things, and order food and beverages from the onsite pantry as well as from a wine bar and cafe, Koles said.

“We believe it is what gives us a strategic advantage,” he added. “Our technology is a tangible differentiator in a world where everyone is trying to out-luxury each other.”

Others are also leveraging tech to offer an additional buyer benefit. Santiago Vanegas, president of Habitat Development, said his company’s project Smart Brickell is being engineered specifically for tech-savvy investors who may want to lease units through home-sharing platforms. The three-tower, mixed-use project comprises 170 fully furnished condo residences and 150 hotel rooms that will have features such as Bosch appliances, Lifx smart lighting that can respond to voice commands, a mobile concierge and Google and Amazon’s smart-home technologies, Nest and Alexa, preinstalled in the units.

Units at Smart Brickell, which is being built in three phases, will be easily available for short-term rentals through a leaseback program that carries an option to rent out condos up to 24 times a year on home-sharing sites. Owners also have the option of allowing the hotel’s management company to handle the renting out to visitors, Vanegas said. Prices at Smart Brickell range between $299,000 and $495,000.

“In downtown Miami and Brickell, 80 percent of preconstruction buyers are investors from Latin America and Europe,” he said. “We are trying to solve a problem for those investors who want to rent their units by offering them a turnkey solution.”

The ability to do short-term rentals is incorporated into the condo documents, Vanegas explained. “It is helping us sell units,” Vanegas said. “About 60 percent of our buyers are interested in choosing the leaseback option.”

Parsiani, who is a sales associate for the Melo Group’s Aria on the Bay, said developers of projects with units priced at $500,000 and above are still placing stiff restrictions on rentals. “At Aria, it’s a six-month minimum and a two-year max for rental agreements,” Parsiani said. “For projects like Aria, developers want the building to maintain a certain level of luxury, so they tend to restrict rentals more.”

Gerard Yetming, a Colliers International executive vice president, said the short-term rental option appeals only to buyers who are looking to purchase units for up to $600,000.“But investors buying at the ultraluxury level are typically purchasing a third or fourth home and have no interest in renting,” he said.