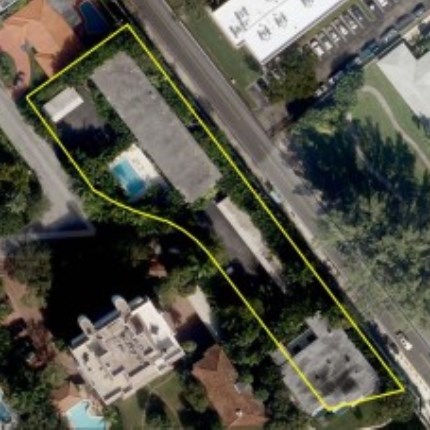 A local developer is reportedly looking to build luxury condos across from Mercy Hospital in Coconut Grove, and has already received the first OK from city commissioners.

Grove Bay Properties, led by Ricardo Vadia, stepped before Miami’s Planning, Zoning and Appeals board two weeks ago to lobby for its project — a 20-unit building dubbed Bay Colony.

The project would sit on a slim strip of waterfront land at 3581 Glencoe Street. It’s currently occupied by a low-rise condominium that was built in 1958.

To make Bay Colony a reality, developers would need approval to change the land’s use and zoning. Two appeals were brought before the board, and both were quickly approved.

The second would up-zone the property from suburban to urban.

Javier Fernandez, an attorney represented Grove Bay, told board members and commissioners at the meeting that Bay Colony would better serve the community by replacing an older and outdated building.

Fernandez also talked about a needed alteration for waterfront setback standards, which he said would be traded for “public benefits” that include direct access to the waterfront.