The private developer of a piece of county-owned land on South Dixie Highway in Coconut Grove has submitted plans for a mixed-use apartment project on the site. 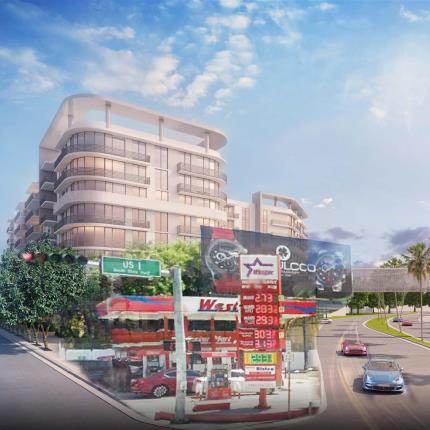 Platform 3750 LLC submitted plans for an eight- and five-story building with 192 workforce and market-rate apartments, 20,200 square feet of retail space, 30,070 square feet of office space, and nearly 11,000 square feet of open space, according to the Miami Urban Development Review Board application. The proposal will be heard on Nov. 16.

The existing government building, the Frankie Shannon Rolle Center that was developed in 1967, would be demolished to make way for the new project at 3750 South Dixie Highway. Records show the county launched a request for proposals to redevelop the site in 2013, with Platform 3750 selected as the winning bid.

The LLC, which leads back to the Hollywood-based Cornerstone Group, is seeking five waivers for the Kobi Karp-designed development. They include a 10 percent reduction in access aisle width, up to 10 percent less of the required parking, two lot coverage increases of up to 10 percent, and vehicular access in a T5-O zone. As planned, Platform 3750 would have 403 parking spaces, 21 bicycle spaces and is seeking at least LEED Silver certification.

It could also include amenities like a spa, rooftop pool, common ground kitchen, movie theater, cafe and a proposed drive-thru Starbucks, according to the application.

Platform 3750 at the Frankie Shannon Rolle Center joins a number of new projects for South Dixie Highway, also called US 1, including the Douglas Station redevelopment by 13th Floor Investments and the Adler Group. The joint venture plans to build the Link at Douglas, a 7-acre, residential, hotel and retail project with a public plaza.