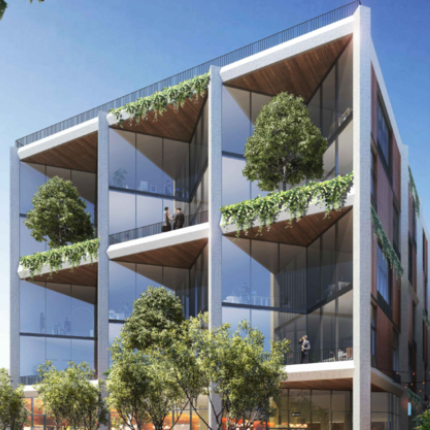 URBIN, a new coworking and co-living concept that has raised $85 million, has revealed plans for the facilities it will build in Coconut Grove.

The other building would be adaptive reuse with co-living, where people would rent by the bed and shares kitchens and other amenities.

The foundation for this project was laid in 2018, when URBIN partnered with Terra, led by David Martin and Banyan Street Capital, led by Rudy Touzet, to buy 3138 Commodore Plaza for $7.2 million.

Designed by Arquitectonica, the 60,000-square-foot building will rise five stories and have an active rooftop, plus a paseo leading to the historic Coconut Grove Playhouse.

“Micro retail is important because many boutique street retailers are priced out of desirable street addresses,” Kapoor said.

URBIN will transform the condos into co-living with about 72 beds. The commercial space will also undergo improvements and a wellness center will be added, Kapoor said. There are already local businesses in the commercial condos URBIN doesn’t own, and Kapoor anticipates they will stay and benefit from the project.

The fully furnished apartments will start at $1,000 a month for a bedroom in a shared unit, Kapoor said. There will also be private suites.

“The people we are catering to are teachers, service professionals, people working in restaurants, entrepreneurs and artists,” Kapoor said. “We are looking to create inclusionary housing at an affordable price point for people who want to live in this core urban submarket.”

Kapoor hopes the multiple uses in the URBIN project will blend together. Both residents and workers can use the wellness services and eat at the food market.

The project will also focus on sustainability, including solar panels, energy-absorbing materials and water conservation and reuse, Kapoor added.

He hopes to complete the URBIN in Coconut Grove in the first half of 2022, but that’s not the only location the company is working on.

The company is working to build a site it acquired in Coral Gables in 2018 into coworking and co-living. Kapoor said it’s also working on securing similar projects in Miami Beach and near the beach in Fort Lauderdale. After that, he hopes to take the concept to other major urban centers across the country.