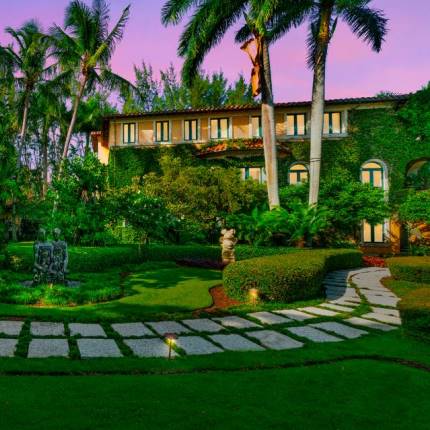 Condo king Jorge Pérez has listed for sale his bayfront estate in Coconut Grove for $33 million, ready to bid farewell to his family’s former primary residence.

The Venetian-style palazzo Villa Cristina landed on the market on Monday, according to Jill Hertzberg, one of the listing agents and co-founder of the Coral Gables and Miami Beach-based brokerage firm, The Jills Zeder Group.

The three-story gated house has six bedrooms, six-and-a-half bathrooms, a gym, office and two-car garage. Sitting on nearly an acre of land at 3323 Devon Court, the estate juts out into Biscayne Bay and has a sculpture garden, fire pit, pool, Jacuzzi and boat dock.

Villa Cristina is one of 10 estates in the gated Hughes Cove community, tucked off of the tree-lined Main Highway and steps from Ransom Everglades School and Carrollton School of the Sacred Heart. The community has a private park, boat basin and tennis court.

The Related Group founder bought the property for his estate in 1994, spending $1.85 million on the land, according to Miami-Dade County property records. He later built Villa Cristina in 1996 and raised his four kids with his wife Darlene Pérez. The couple traded living in their single-family home for a condo at Park Grove earlier this year, according to a Related Group spokesperson.