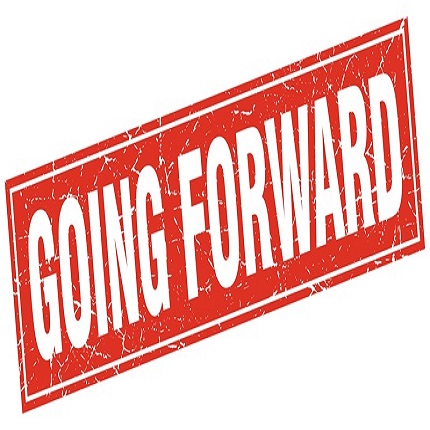 A controversial plan to revive the historic, long-shuttered Coconut Grove Playhouse that requires demolition of its auditorium narrowly won the endorsement of Miami commissioners on Wednesday, May 8th, but backers are not celebrating as the potential for a mayoral veto looms.

The 3-2 vote, which came after more than six hours of public testimony and debate well into the evening, is not enough to override a possible veto by Miami Mayor Francis Suarez. Suarez, who was at the special commission meeting early but only briefly, has not said what he intends to do nor spelled out a position on the playhouse issue. He has 10 calendar days to issue a veto.

Suarez is a political ally of Commission Chairman Ken Russell, who has tried to push the administration of Miami-Dade Mayor Carlos Gimenez to save the 1927 theater’s massive auditorium. The county, which developed the $23 million blueprint for replacing the 1,100-seat auditorium with a smaller, stand-alone theater under an agreement with the state of Florida, says it’s obsolete and too large to be fiscally successful. The county plan would restore the signature, wing-shaped Mediterranean front section of the playhouse — actually a three-story structure — to its original look.

“It’s now in the mayor’s hands,” Russell told a supporter after the hearing ended.

Russell, who represents the Grove, earlier made an unsuccessful motion that would have compelled the county to “compromise” with critics of the plan by requiring that the shell of the auditorium be preserved while authorizing work to restore the front building and construct a companion parking garage. It failed on a 3-2 vote.

“Somebody has to be the champion for preservation,” Russell argued. “I don’t believe in the demolition of the auditorium. Removal of it has an impact. We have got to keep talking about this.” 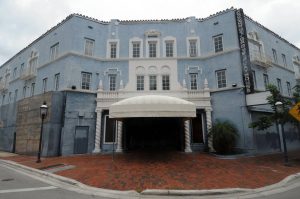 That was Russell’s second unsuccessful attempt to block demolition. Last year, he persuaded fellow commissioners to overturn a historic preservation board decision that would have allowed the auditorium to be torn down.

At his behest, the commission then approved a resolution requiring that the county save and restore the auditorium. The county appealed that resolution, and Miami-Dade circuit court’s appellate division then overturned the commission decision, ruling the elected officials had overstepped their authority. 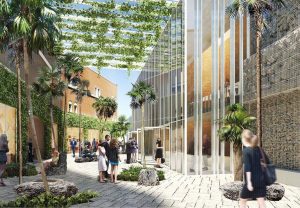 An architectural rendering shows the restored front of the Coconut Grove Playhouse building at left with a new, freestanding 300-seat theater on the right and a new plaza at center. (PHOTO CREDIT: ARQUITECTONICA/MIAMI-DADE COUNTY)

But in what has been a topsy-turvy and unpredictable process for the county plan, the city’s preservation board, with several new members, made an about-face earlier this year and voted against allowing demolition — something the county says would doom its plan. The county appealed again, this time to the city commission as required.

Such were the stakes for Gimenez, a longtime Grove resident, that he personally lobbied Miami commissioners to overturn the preservation board’s denial of his plan. Gimenez also sat through most of the prolonged hearing on Wednesday and spoke forcefully to commissioners, warning that if they did not approve the last-gasp appeal, the future of the playhouse, which has been vacant since closing abruptly in 2006, would be ”in jeopardy.”

“We have been working on this for years,” Gimenez said. “We have faced roadblock after roadblock, none of which were our doing. Today is the last opportunity to make this a reality. We are ready to go. The choice is simple. Approve our project. Or nothing happens. Believe me. Nothing will happen there for years.”

The hearing also marked the public reappearance of a rival concept for a larger theater inside the shell of the old one developed by politically influential attorney and arts patron Mike Eidson in collaboration with preservation architect Richard Heisenbottle, who lost a bid to design the playhouse renovation.

When Russell persuaded the commission to stop demolition the first time, the resolution also gave Eidson time to raise an extra $20 million to fund his more expensive idea. Eidson failed to do so. Eidson appeared at the hearing Wednesday, again pledging to raise money for his larger version of the playhouse renovation.

But Gimenez pointedly questioned Eidson’s concept at the hearing, and said the lawyer made similar promises to him four years ago as the county began developing its plan but had raised “exactly zero” money. Eidson has claimed to have millions in pledges but acknowledges he does not have funds in hand to carry out his concept.

Eidson has been a donor and fundraiser of Suarez, the Miami mayor. Gimenez alluded to that fact in a brief interview after Wednesday’s hearings when asked whether he was concerned about a mayoral veto of the plan approval.

“Mr. Eidson has a lot of influence,” Gimenez said.

Eidson, a prolific political donor and fundraiser, also persuaded U.S. Rep. Frederica Wilson to intervene in the playhouse matter at the last minute. The Democratic congresswoman, who is of Bahamian descent and is seeking backing for a Bahamian cultural center, got the commission to delay its hearing two weeks so her staff could participate. Though the Grove is not in her district, the West Grove was founded by Bahamian settlers. The playhouse sits on the edge between the central downtown Grove and the West Grove.

On Wednesday, her representatives said the Grove’s Bahamian community had been excluded for decades from the playhouse under legal segregation though Bahamian laborers helped build it, and they asked for participation in the restored theater. That plea seemed to find a sympathetic hearing with Commissioner Keon Hardemon, who represents historically black neighborhoods like Overtown, Little Haiti and Liberty City. Hardemon voted for Russell’s unsuccessful motion barring demolition and against a second, successful motion, this one by Commissioner Joe Carollo, to approve the county plan.

“If we don’t do it today, it’s not going to happen at all,” Carollo said. “I’d rather have a well-thought out plan that on the financial plan is going to work, than nothing at all.”

Under the state agreement, the county must complete the playhouse project by 2022. Gimenez has said the county plan, which calls for a 300-seat theater, is the only economically and artistically feasible approach.

The nonprofit playhouse was $4 million in debt when it closed, a crunch blamed in part on long-term inability to fill its large auditorium.

View ‘A Brief History of The Coconut Grove Playhouse’ below: