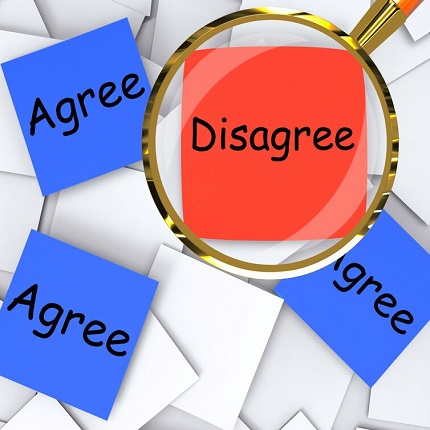 A tangled, years-long battle over the fate of the historic but shuttered Coconut Grove Playhouse is ratcheting up again as a freshman Miami-Dade commissioner pushes a modified “compromise,” even as Miami Mayor Francis Suarez doubles down on his effort to kill it.

Miami-Dade Commissioner Raquel Regalado, appointed by fellow commissioners to broker a compromise with the Suarez administration over stalled efforts to reopen the iconic, state-owned 1927 theater, has been floating a new, softer version of the original county plan, which calls for replacement of the Playhouse’s massive and outmoded auditorium with a new, $23 million stand-alone theater. The county plan also calls for renovating the playhouse’s signature Mediterranean wing-shaped, three-story front building and restoring its original use as retail, office and restaurant space.

Regalado’s version, developed in tandem with the county’s cultural affairs department and its consulting architects at Grove-based Arquitectonica, keeps most of the elements of their original plan, including the demolish-and-replace scheme for the auditorium. But it replaces a hard-edged, stone exterior design for the new, 300-seat theater with a woodsy finish that Regalado says is a better fit for the Grove. It also reduces the height of a revenue-producing parking garage to be built on the Playhouse surface lot from 80 feet to 45 feet, or a drop of two stories, among other modifications to the county’s initial site plan.

Regalado’s version of the plan is greener throughout. It adds shade trees and greenery as well as a small park facing the historically Black, once-segregated West Grove neighborhood at the theater’s rear, in part a response to criticism that the project did little for the underserved community. The park connects through the playhouse property directly to Main Highway, breaking through an invisible historic wall that once kept Black and white Grove residents apart, she noted.

The newer proposal also adds educational and theater programming aimed at children and families in the neighborhood, she noted. 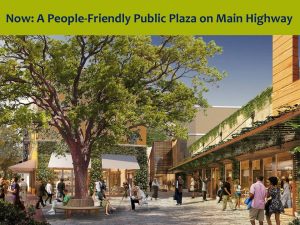 An architectural rendering from a modified plan prepared under the guidance of Miami-Dade Commissioner Raquel Regalado shows the restored front building of the Coconut Grove Playhouse at left with a new, woodsier, greener and shadier plaza and exterior for the freestanding modern theater at right. (IMAGE CREDIT: Marialaura Leslie, MIAMI-DADE)

The plan reflects a sharp turnaround in Regalado’s position on the Playhouse.

Regalado, elected last year to the county commission district seat that includes Coconut Grove, sided during her campaign with a group of preservationists and neighborhood activists who want the entire original theater preserved and renovated and who have rallied support from Suarez and other city political leaders. Though the county controls the playhouse through a 2014 lease with the state, the city retains regulatory power over the property, a designated city historic site. In 2019, Suarez vetoed the city commission’s narrow approval of the county plan, which came after years of planning and review.

Regalado, who served on the Grove Playhouse board when the nonprofit theater closed abruptly amid mounting debt, said she changed her mind once she took a “deep dive” into the county plan and the state lease after her election. She said she has also met with Suarez and critics of the county plan, including lawyer and arts patron Lewis “Mike” Eidson, who has backed a so-far-unsuccessful effort to persuade the county to build a larger theater or undertake a full renovation of the old auditorium.

She said she concluded that drastically changing the plan, approved under the administration of former Gov. Rick Scott, would require renegotiation with the state and Gov. Ron Desantis, plus several years of further delays for new designs and plans, reviews and approvals. All that would come with no certainty that a new, larger blueprint would prove feasible, attract the necessary additional funding, or win state approval, she said.

That would place the deteriorating playhouse building, closed since 2006, in even greater jeopardy, Regalado said in an interview. Going with an improved version of the county plan, by contrast, would require only city building permits and could see a finished theater by 2025, she said, calling the project “shovel-ready.”

“I tried to figure out what could and couldn’t be done…within the four corners of the contract,”  Regalado said. “I based a lot of the changes on the complaints about the original plan. That’s why you see a lot of it changing the stark, sugar-cube look of it that is not so loved in Coconut Grove. It had that boxy feel to it.” 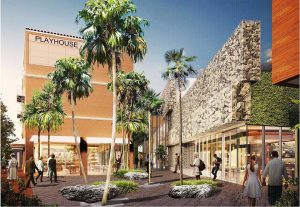 An architectural rendering shows the restored front building of the Coconut Grove Playhouse at left with a new, freestanding modern theater at right. (IMAGE CREDIT: ARQUITECTONICA)

Regalado has not widely disseminated her plan, focusing on presentations to small groups, including the Miami Herald’s editorial board, as she tries to sound out reactions. In early July, the Herald ran an op-ed by Regalado and an editorial criticizing the city’s decision to continue a legal battle against the county plan, but those had few concrete details about Regalado’s alternative.

The full slide presentation was published by the Coconut Grove Spotlight website earlier this month, along with an interview with Regalado, after editor Hank Sanchez-Resnik asked for a copy from the commissioner. Regalado now says she is planning a public presentation and forum sometime in September.

The Regalado plan was prepared in close consultation with the county cultural affairs office, which falls under the office of Miami-Dade Mayor Daniella Levine Cava and has been managing the Playhouse project since it was originated under the previous mayor, now U.S. Rep. Carlos Gimenez. The presentation slide deck bears the county seal.

In an emailed statement in response to questions from the Herald about whether she will back the modified version of the county plan, Levine Cava said she hopes Regalado succeeds in crafting a compromise that meets “community needs.”

“We are hopeful that the community will be supportive of a plan that addresses historic preservation, returns great theater to the Coconut Grove Playhouse, and is pedestrian and Grove-friendly. Commissioner Regalado has presented some revisions and is seeking community input. It’s critical that we continue to engage residents in the process to meet the community’s needs and hopes for this treasured cultural space that has been waiting for too long for a solution,” the statement says. 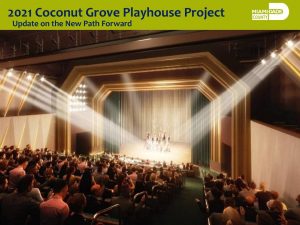 The first page of a modified Miami-Dade County plan for revamping the Coconut Grove Playhouse displays a rendering of a planned new 300-seat theater’s auditorium, which would use the original double proscenium arch around the stage. (IMAGE CREDIT: Marialaura Leslie MIAMI-DADE) COUNTY

Regalado’s plan has not blunted opposition from activists or from Suarez.

The county, which sued the city to overturn Suarez’s veto, won an appellate court decision in January that called the city mayor’s action inappropriate after judges concluded that in drafting his order he had privately consulted emails from opponents of the plan outside of the public hearings where zoning approvals must legally be considered.

That then led a lower court to reinstate the Miami commission approval of Miami-Dade’s Playhouse plan. The courts then rejected two subsequent petitions by the city to reconsider the case, but Suarez has persisted, and he won city commission approval to file yet another appeal in July after hearing Regalado’s presentation.

In a legal brief filed in response to the city’s latest claim at the Third District Court of Appeal, attorneys for the county called the fray an “already overlong production” and asked the court to shut it down.

“The public deserves finality at this point,” the brief says. “It is time for the curtain to close and for the City to leave the stage.”

Through a spokeswoman, Suarez said he is studying the Regalado proposal and gauging stakeholders’ reactions before issuing a response of his own. 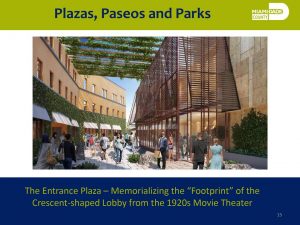 An architectural rendering from a modified plan prepared under the guidance of Miami-Dade Commissioner Raquel Regalado shows the restored front building of the Coconut Grove Playhouse at left with a new, woodsier, greener and shadier plaza and exterior for the freestanding modern theater at right. (IMAGE CREDIT: Marialaura Leslie MIAMI-DADE COUNTY)

In response to Regalado’s change of heart, opponents of the county plan have launched a social-media campaign criticizing her new posture, sending out links to YouTube videos taking aim at the commissioner and posting them on savethecoconutgroveplayhouse.com.

Grove architectural designer and activist Melissa Meyer called Regalado’s reversal “political” and suggested she came under pressure from stakeholders who stand to profit from the county plan, including the project’s architects.

“To have newly elected politicians working behind the scenes with stakeholders, that’s a crime,” Meyer said. “It makes me so angry this has taken so long. And we thought we had a newly elected official who would represent us with integrity, and now they’re not.”

Meyer also said Regalado’s modified plan is all window-dressing with no substantive change.

“She added some wood to a concrete façade. That’s not changing the plan at all. She made a big fool of herself,” Meyer said. “Putting some wood on a crappy design doesn’t make it better.”

Meyer and other activists insist that the county could create a modern theater inside the shell of the old auditorium while preserving its historic character, although the city landmark designation report in 2005 explicitly ruled out protecting the interior after city officials concluded it had been altered too much over the years to retain any architectural integrity.

“At the end we’ll get a modern building but in a restored historic building,” Meyer said. “This is what the public wants. When they hell are the going to listen to us?”

Regalado said talks between city and county lawyers are ongoing and some progress has been made on resolving legal issues. But she acknowledged opponents of the county plan don’t appear to be budging.

She said “purists” who want to preserve an outmoded structure are acting out of nostalgia, but that a large theater would not be economically sustainable and efforts to start from scratch are unlikely to receive political support at the state, which has threatened in recent years to take back the theater if the county project is not completed. Under state laws governing surplus property, the Playhouse could be auctioned off to private owners.

“They didn’t want to talk about a compromise,” Regalado said of her critics. “It was my way or the highway. I don’t think they understand what it means to start again.”