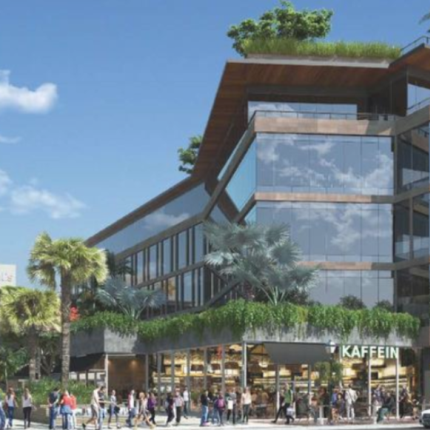 Mixed-use developments are taking on a new vitality. They now have a live-work-play energy and 24/7 bustle, and they’re becoming 365-days-a-year destinations that give neighborhood residents a place to walk to.

“Everything now is mixed-use,” says Russ Beck, Operations Manager for Juneau Construction Company. “People want to drive less. They want to be close to work, close to fun.”

Juneau is renovating the popular CocoWalk shopping plaza in Coconut Grove to bring the neighborhood its newest office space with the benefit of being able to walk to restaurants and entertainment.

CocoWalk was built in 1991 and features a movie theater, gym, and three stories of shops and restaurants. Juneau and project owners Federal Realty Investment Trust, Grass River Property and the Comras Co. are transforming it to include a new five-story, Class A office building and a lush open-air plaza with water features, seating and a smoothie bar.

The shopping center and movie theater will remain open throughout the construction project, which is expected to be completed by 2019. When completed, there will be 81,000 square feet of office space and up to 14,000 square feet of ground-floor retail. This is Juneau’s second major project in the area after completing Grove Station Tower.

CocoWalk’s dated Mediterranean look is being updated by Juneau to something more modern.

“We’re renovating the facade, making rounded edges square and taking off molding and cornice, giving it a modern finish,” Beck says. “All surfaces will be touched, adding stone and applying stucco materials.”

The office building, to be called One CocoWalk, is being designed by Miami-based Beame Architectural Partnership as an example of a more human-focused work space that brings tenants amenities more typically found in homes.

There are plans for a rooftop deck with plenty of greenery, a bar and event space office tenants can rent, and the office building will feature landscaped terraces that could be used as open-air meeting space, said Federico Vidargas, design director at Beame Architectural.

The office building is seeking LEED Silver certification and reflects a larger trend of demand by users around the world to be in LEED-certified buildings, Vidargas said.

“After several decades of trying to push for sustainable and efficient design, now the industry is really grabbing onto that and pushing harder to get to the highest levels of LEED,” he says.

The construction project is one of several in the surrounding neighborhood, which is under revival, Beck says. A new boutique hotel is being built across the street from CocoWalk.

“People want to work in the neighborhood, so I think our clients are taking this opportunity to provide that urban feel away from the downtown core,” Beck said. “At CocoWalk, people can walk to get something to eat, get their nails done, go to the gym.”