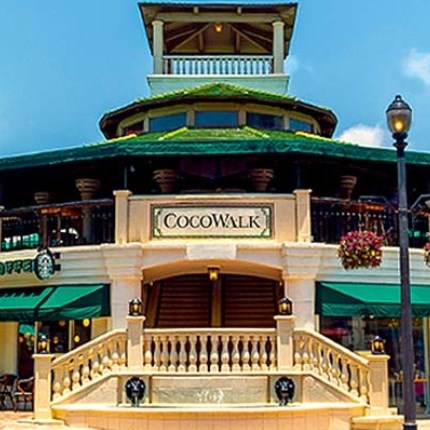 The 198,000-square-foot, four-story lifestyle center at 3015 to 3059 Grand Ave. has tenants such as the Cheesecake Factory, Paragon Grove 14 Theater, Duffy’s Sports Grill, the GAP, Starbucks, and Victoria’s Secret.

The price equates to $442 per square foot.

“CocoWalk is the focal point of Coconut Grove’s historic village center, a short walk from Biscayne Bay and some of Miami’s most prominent residential neighborhoods,” Jim Taylor, executive VP and CFO of Federal Realty said in a news release. “Surrounded by new residential towers, hotels, offices, schools, parks and marinas, CocoWalk’s tenants serve more than 150,000 Coconut Grove residents and millions of visitors each year. Partnering with neighborhood experts, we see significant opportunity to transform and remerchandise a property at the center of Miami’s most authentic district.”

CocoWalk was built in 1990 and last traded for $87 million in 2006. Because of the recession, its value didn’t increase much over the years.

The complex was hit with a foreclosure lawsuit in 2009, but PMAT retained ownership after agreeing to a modified $79.4 million mortgage in 2010.

“Local, regional and national retailers and restaurateurs are increasingly seeking walkable environments where they can connect year-round and throughout the day with their customers,” Michael Comras said. “Their enthusiasm for CocoWalk’s location will drive a powerful merchandising mix that captures the Grove’s vibe.”

Coconut Grove has seen an influx of residential development, including several large condominiums. That should allow for more customers at CocoWalk. However, it could also face competition from the new mall under construction at Brickell City Centre.

“Locals are embracing Coconut Grove’s resurgence as a destination that’s home to quality retail, entertainment and dining reflecting their needs and lifestyle,” Grass River Property principal George Spillis said. “As we move forward, we plan to better integrate CocoWalk into the historic and evolving fabric of the surrounding neighborhood and the larger Grove community.”