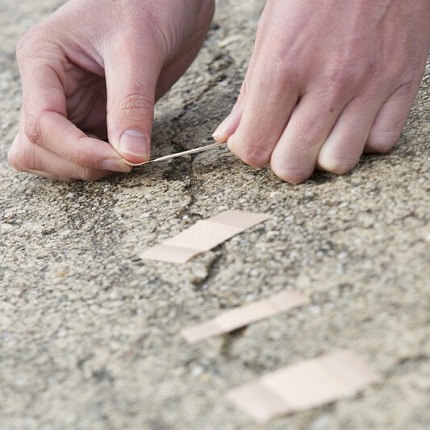 In Coconut Grove, Miami’s oldest neighborhood, lies one of the city’s most picturesque and popular roadways — and one of its messiest and most stressed.

South Bayshore Drive, for much of its two-mile length a narrow historic road, threads its way under a dense tree canopy past waterfront parks, Miami City Hall, marinas and sailing clubs, and mansions and estates, including the grandest of all, Vizcaya Museum and Gardens.

The road is, simultaneously, a funnel for speeding automobile commuter traffic — that is, when it’s not totally logjammed — and home along its eastern edge to a big chunk of one of the busiest and oldest pathways for pedestrians, runners and cyclists in the car-choked city. Though many use the scenic path, few know it by its official name: The Commodore Trail.

Now, as Miami-Dade County’s transportation and public works department launches a $16 million, multiyear effort to rebuild road and trail after years of talk but little action, its engineers face a difficult conundrum: How to improve road conditions in the narrow corridor while enhancing the safety and appeal of the heavily used though frayed Commodore Trail, and also sparing the often massive trees that lend South Bayshore much of its unique character.

One complicating factor has been the trail’s historic significance. It follows the route of a gravel path that connected the village of Coconut Grove, founded in the late 1800s, and the settlement on the Miami River that would later, in 1896, become the city of Miami.

The rebuilding project covers a 1.5-mile stretch of the road and trail from Mercy Hospital’s main entrance south to Darwin Street, across from the Fresh Market store and the Grove Harbour Marina. The road is afflicted by deteriorating surfaces, overburdened by heavy motorized traffic, and prone to flooding in spots in a hard rain. It can’t be widened an inch because it’s designated as a historic state road.

The adjacent trail, though officially designated as a path for non-motorized use, consists of not much more than haphazardly strung-together sections of sidewalk and faintly marked roadway shoulder. It’s full of cracks, bumps, potholes and other obstacles. In some spots, it provides little room for cyclists, runners and pedestrians moving in opposite directions to squeeze by one another safely.

Though the route was identified as a trail in planning documents as early as 1969, advocates say, it was never really designed as such, and often puts users perilously close to fast-moving cars.

“I don’t like it. I feel that it’s definitely dangerous,” said Hank Sanchez-Resnik, a Grove resident, longtime cyclist and co-founder of Friends of the Commodore Trail, a nonprofit group that’s been pushing for a redesigned, improved path. “I think it’s disgraceful. To call it a trail is an insult to trails.”

County engineers and their consultants acknowledge it will be difficult within the narrow confines of the public right of way to improve traffic flow — one of the project’s goals — while providing enough space to accommodate a safer trail and preserve trees and mandatory historic elements like rock walls and coral-rock markers.

“It’s very tight and we’re trying to avoid impact to the landscaped areas,” the county department’s assistant director for highway engineering, Miguel Soria, told 140 attendees at an April 27 public workshop via Zoom. “We’re trying to balance a little bit here and a little bit there.”

County engineers and their consultants at Kimley-Horn devised one version of the plan that would put unprotected bike lanes in each direction on the roadway, and a separated paved path for people on foot off its eastern edge. But the engineers and advocates agree that layout is far from ideal, because the painted bike lanes would not sufficiently protect cyclists from cars.

Instead, consensus seems to be gelling around a preferred, if preliminary, alternative blueprint for entirely separating the road and a “shared-use” trail — though cyclists would still have the right under Florida law to ride on the road if they choose. 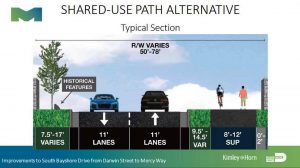 A rendering shows how Miami-Dade County may rebuild a 1.5-mile segment of historic South Bayshore Drive and the Commodore Trail in Miami’s Coconut Grove under a $16 million plan now under development. The plan would preserve historic coral-rock features and trees while rebuilding the roadway and adding a new, separated shared-use trail for people on foot and on bicycles to the right. (IMAGE CREDIT: Miami-Dade County)

The plans call for lengthening and adding some turn lanes to relieve backups along the road, something that can be done within the existing right of way without widening, while adding drainage and sewer improvements and a pump station at Kennedy Park.

Portions of the road might also be raised to better protect it from rising sea levels and increasing hurricane surge, though the county says most of it already meets county flood standards, which take climate change into account. The plan also would for the first time add curbs and gutters to the two-lane stretch of South Bayshore, which runs between Mercy Hospital to the north and Aviation Street to the south. South Bayshore widens to four lanes on either end, as it passes the hospital and approaches the Grove village center.

Separated from the road by a landscaped buffer zone, the parallel shared-use asphalt trail in this version of the plan would “meander” around trees and historic roadway features. It would have striped markings to separate people on foot from people on bikes. The trail width would vary from a minimum of eight feet in some tight spots to a maximum of 12 feet. Most of the trail would range from 10 to 12 feet, county planners said.

But the eight-foot sections, which critics say are too narrow to safely accommodate both walkers and cyclists, and the lack of traffic-calming designs such as speed tables on the roadway, prompted pushback from attendees at the Zoom meeting. Some suggested the county is placing too much emphasis on improving traffic flow, which contributes to speeding, and not enough on making space for people on foot and on bikes.

“These people (in cars) are doing 40, 50, 60 miles an hour,” South Bayshore resident Irwin Halperin told county officials. “How to control the speed on South Bayshore has got to be part of this plan, because it’s out of control right now.”

One advocate called instead for placing South Bayshore on a “road diet” — narrowing or eliminating lanes to slow auto traffic while providing more room for the trail.

“I think there is a lot more space that can be used. It’s not being used equitably,“ said Kurt Kaminer, social marketing manager at the University of Miami’s BikeSafe injury-prevention program, in an interview. “It really gives the short end of the stick to the Commodore Trail. You have residents who want slower streets, who want more of a neighborhood street. This section of the Commodore Trail could be much better than the proposals here.”

As an alternative example, Kaminer and other advocates cited a separate Commodore Trail project by the city of Miami, which hired noted planning consultants Dover Kohl & Partners to develop a master plan for the rest of the five-mile-long pathway.

The Dover Kohl plan, also still in the drafting stage, covers the two ends of the Commodore Trail not included in the county plan. The full trail runs from the entrance to the Rickenbacker Causeway south along South Bayshore to the village center, wending its way along Main Highway, Douglas Road and Edgewater Drive before traversing a short piece of Coral Gables and ending at Cocoplum Circle. Those existing southern sections, too, have been criticized as hazardous and poorly designed

“In some areas, Dover Kohl has proposed slimming the roadway to expand the trail’s width and buffer it from cars,” said Mary Munroe Seabrook, co-founder of Friends of the Commodore Trail.

Advocates had been waiting years for the city to come up with a long-promised plan to improve the trail. Because Bayshore Drive is controlled by Miami-Dade, though, the county opted instead to move ahead on its own with that segment.

The trail is named after Friends group co-founder Munroe Seabrook’s great-grandfather, Ralph Middleton Munroe. The New England native was a noted yacht designer and influential early Grove settler who in 1887 helped found the Biscayne Bay Yacht Club, where he held the title of “Commodore” as presiding officer for 22 years. The trail today passes by the private club’s coral-stone front entrance as well as Munroe’s bayfront home on Main Highway, the Barnacle, a state park.

Munroe Seabrook and Sanchez-Resnik urged county engineers to preserve its historic spirit and enhance its safety by cutting back on the roadway and making ample room for the trail.

The engineers stressed their plan, which is funded in full by road-impact fees charged to real estate developers, is far from done. They said they will refine the blueprint, as the county holds other public workshops to gather and consider public input. The final design is not due until the end of 2024, with construction expected to start in summer of 2025 for scheduled completion in fall 2026.

While praising the public works agency for taking the need for trail improvements seriously and its receptiveness to public comments, Sanchez-Resnik said the engineers need to find creative ways to make more space for the trail.

To the road engineers, Sanchez-Resnik said, “The purpose of roadways is to move cars as fast as possible.” But, he added, “that’s not what this should be about.”