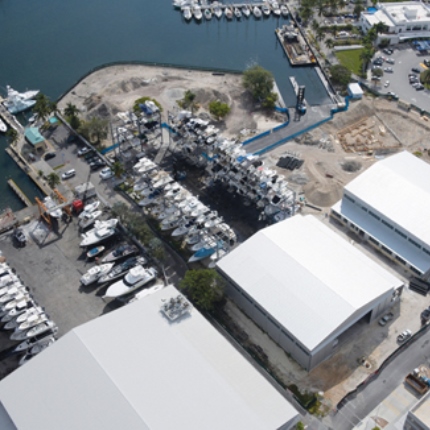 Years in the making, Regatta Harbour is rising on the Coconut Grove waterfront and the developer has its eye on a completion date in early 2022.

Rising on nearly 10 acres at the city’s historic Dinner Key, mixed-use development Regatta Harbour is the combined effort of The TREO Group – a privately held real estate investment firm – the City of Miami, and the Miami Parking Authority.

The overall project is to remake the waterfront in an area that for years was home to Scotty’s Landing and The Chart House restaurants, adjacent to City Hall.

In an email this week to Miami Today, a spokesperson for The TREO Group said the project is slated for completion in the first quarter of 2022.

Regatta Harbour is poised to dramatically transform the area’s bayfront with an amenity-rich, “Play by the Bay” destination, said the spokesperson.

Delivered in multiple phases, the project will present more than 100,000 square feet of entertainment, retail and chef-driven restaurants.

Stalled for years by litigation, adverse weather, the economy, redesigns and more, work began on the project in the fall of 2018 and the development took a major step forward with construction of the Regatta Harbour Parking Garage, a multi-million-dollar endeavor spearheaded by the parking authority as part of the overall public-private partnership.

The City of Miami celebrated the opening of the new municipal parking garage with its foundation of commercial spaces in August 2020. The facility is owned and operated by the parking authority.

The partners say the new facility aims to alleviate parking congestion in the neighborhood, as the destination undergoes a significant renaissance to introduce unique retail and culinary experiences.

Phase 1 of the overall development was construction of the new marina and dry stack system, completed in 2019; a $5.5 million overhaul of the former Grove Key Marina.

Phase 3 includes the individual tenant build-outs, currently in progress and slated for competition by the first quarter of 2022.

Phase 4 includes the new restaurants and renovating and restoring the historic airplane hangars on the waterfront utilized in the early 1900s as the first continental Naval air station, and later by Pan Am Airways.

Work on the hangars is expected to begin in September 2021, converting the former hangars – one into marina storage and the second, 20,000-square-foot hangar as a unique setting for a gourmet food hall and entertainment concept.

The casual restaurant has a tentative opening set for the end of this year’s third quarter or early in the fourth quarter, according to The TREO Group.

Opening its doors this month inside the 542-space parking garage is Anatomy, a fitness gym encompassing approximately 15,000 square feet in the southern portion of the ground floor. Anatomy is described as a progressive fitness community that integrates exercise programming with sports science, wellness and beauty. Regatta Harbour marks Anatomy’s fourth gym in South Florida. Wells Fargo is also setting up shop inside the garage and plans to open this summer.