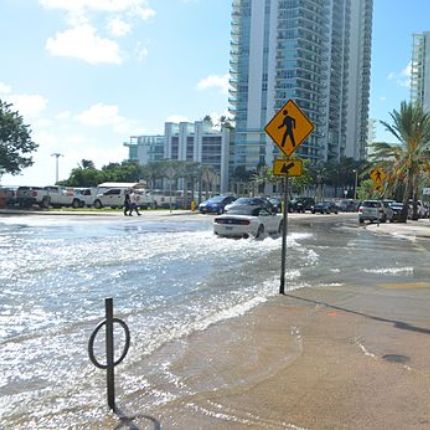 On a map, the only natural water body nearby Alan and Alicia Sirkin’s home in the Coconut Grove neighborhood of Miami is Biscayne Bay. But after living there more than 25 years, they’ve become familiar with some other ones: the river created when rain pours down from the highest elevation point on their street and the pond that forms in front of their home nearly daily in the rainy season.

A small group of neighbors who own some of Miami’s most valuable waterfront real estate, eager for new solutions to this old problem, have drawn up an ambitious set of recommendations with a landscape architect and urban designer for how to keep their vulnerable slice of dry land drier and, if that eventually fails, even abandon it altogether if sea rise inundates the shoreline.

For Bay Homes Drive, some of the plan’s concepts are radical or even illegal under current regulations: installing a mini sewage treatment plant on an empty lot, for instance, or building an artificial island in the bay to clean pumped water.

“Not that it’s impossible – just on the books technically you can’t do that right now,” said Walter Meyer, co-lead of Local Office Landscape and Urban Design, the firm that held community meetings and put together the plan.

Finally, there’s the staggeringly expensive prospect of buying out the low-lying homes to turn the area into a conservation park – the doomsday option no one particularly likes to contemplate.

The city of Miami paid $25,000 for the plan, which could prove to be the blueprint for how the city addresses the looming crisis of sea level rise: neighborhood by neighborhood.

But it could also end up more of an exercise in wishful thinking, depending on buy-in from homeowners and the politics of who-gets-what across Miami’s neighborhoods. That’s a debate to be had in the near future following the approval of $192 million of bonds meant to tackle sea rise projects.

Mr. Meyer argues that for a city already facing flooding regularly and with predictions for one to two feet of sea rise by 2060, the concepts on the table aren’t radical, they’re necessary.

“If you don’t know how to identify the policy barriers and challenge them, these ideas will sit on the shelf and gather dust. We can’t have that,” he said. “We need solutions.”

The residents of Bay Homes Drive agree. The more than three dozen homes on the one-lane, crooked horseshoe of a street haven’t seen city-funded improvements in more than two decades, after a school bus got stuck in a pothole and the city resurfaced the street, Alicia Sirkin said.

Now, when it comes to their street, residents would like the city to follow their recommendations and do things differently. Tier one of the plan is ideas that could be done in the next three years. The major proposal is to swap regular asphalt for porous pavement, which is designed to allow water to filter through the road and into the ground.

To understand why that might work, it helps to know the street’s unique geography. Part of the road is on the region’s coral ridge, more than 20 feet above sea level, but a steep drop leaves the other half nearly flush with the bay. The Sirkins’s property is a mere two and a half feet above sea level.

Nearest to the bay, tidal water can be seen sloshing just one foot below the street’s drains, even on a sunny day. Higher up on the road, the ground water table is much deeper. Swapping in porous pavement would, in theory, allow rainwater to filter into that open geological zone rather than rush down the road and into “Lake Sirkin.”

Installing a porous road, however, is expensive work. It would involve excavating several feet of dirt under the road, rather than scraping off a thin layer and pouring on new asphalt the way resurfacing traditionally happens. Meyer estimates it would cost around $264,000.

Meyer also suggests the road should be lined with plants to absorb excess water and filter it into the aquifer – an estimated $605,000 project. For the same reason, he said, homeowners should install even more plants along their property lines to form “rain gardens.”

“Tier two” in the plan gets even more ambitious – and contentious. It calls for a tiny, silent and odorless “waste-to-energy” sewage treatment plant in a neighborhood lot to replace a good portion of the area’s leaky septic tanks, which release pollution into the bay. Some neighbors are wary of the impact on property values, and Meyer said the idea, though gaining steam as a response to sea rise, is still revolutionary in South Florida.

“It goes against the grain of decades of county waste management,” he said.

That cleaned waste water could then be channeled into the bay through a series of plants and animals designed to purify it further, including oysters, and strengthen the shoreline against storm surge, like corals.

City leaders said it’s too early to tell if any of the plan’s suggestions are feasible.

“We really are in the conceptual phase” said Steve Williamson, the city’s director of capital improvements. Mr. Williamson described the plans as a “micro-project” under review to determine what can and cannot work.

Commissioner Ken Russell, who as district commissioner pushed for the development of the plan, thinks all options should be taken seriously.

“We have to think very boldly about this issue,” he said. “We have to be willing to take big actions.”

Getting residents on board with the fixes to their street is a core part of the process, said Jane Gilbert, the city’s chief resilience officer. Moving forward, it’s also Miami’s strategy for sea rise projects, including the Shorecrest neighborhood and the city’s stormwater master plan — an under-development roadmap for Miami’s future drainage needs.

The hope is that working with neighbors from the start would avoid some of the infighting seen in Miami Beach, a city struggling to convince some of its residents to support its anti-flooding plans.

Whatever happens on Bay Homes Drive, money will be key. Depending on whether the work is considered high-priority by Miami’s administration, it could receive a piece of the voter-approved $192 million in bonds for projects related to resilience and sea rise.

Ms. Gilbert said all projects for the bond, as well as the stormwater master plan, will undergo a cost benefit analysis of their benefits to the environment, the economy and the equity of the neighborhood and be prioritized in order of highest score.

So far, the city has not chosen potential bond projects. City Manager Emilio Gonzalez, who has not yet seen the Bay Homes Drive plan, said he hopes to identify some immediate needs that the city can address sooner than later.

“We want to spend this money judiciously,” he said. “We have to spend it where it’s needed the most.”

For neighbors who have complained for two decades, the need on their street is clear. Alicia Sirkin wears a pair of rainboots to wade through the floodwaters and take her garbage out, which she said isn’t collected when the street is underwater. Her neighbor, Fernandes, has to carry his dog uphill for walks when his street turns into a lake.

Their faith in the city’s ability to help, however, isn’t strong, even with the new plan on the table.

Alan Sirkin took matters into his own hands recently. He paid $50,000 to have the street in front of his home elevated 10 inches, repaved and to install a new drain.

“We’ve been telling them what we want for years and they’ve done nothing,” he said. “Meanwhile, we need to do something now.”

While the struggle at City Hall is likely to focus on the road for the next few years, the new plan also took a stab at planning for the future, when sea rise is predicted to get much worse.

If using pumps is unavoidable, Meyer proposed the water they process is treated naturally. One idea involved building an island in Biscayne Bay. The water-polishing atoll would filter the dirty stormwater through the center of the island and let it trickle out into the bay, possibly through a ring of mangroves or more oysters. Of course, that’s an idea likely to create concerns about marine pollution and sea grass loss.

Tier three, things that might be a possibility five years or more down the road, also puts a concept on the table that’s common conversation among scientists but taboo for politicians and residents – retreat.

If some of the more dire predictions for sea rise come true, scientists say coastal homes will become unlivable. Repetitive floods will lower property values and make everyday living tougher and tougher. At that point, the only option is to move elsewhere.

Planners hoping to avoid the chaos and economic disruption that could come from mass relocation say the answer is to control the process, which Meyer refers to in his report as reorganization. He envisions the process as buying out the most vulnerable (and expensive) properties and turning the area into a conservation park – an estimated $42 million endeavor just for the dozen homes most at risk.

At that price, the cost of relocation is above and beyond nearly any coastal city’s budget, including Miami’s. “You add this up along the coast of Miami and you realize this is impossible. It’s a trillion dollar problem,” Meyer said.

It may also be a tough sell in some places. Even if the price tag wasn’t so high, residents in the high-risk area Meyer outlined said they wouldn’t consider leaving the homes they’d lived in for decades.

Mary Crittenden, a 17-year resident on the street, said she understands why retreating from the neighborhood is a sensible long term plan because the geography clearly calls for it. But the emotional attachment people have to their homes, she said, will make that a difficult proposition.

“I think we’re talking about people who are only going to leave this neighborhood in a box,” she said. “I just don’t think it’s realistic.”