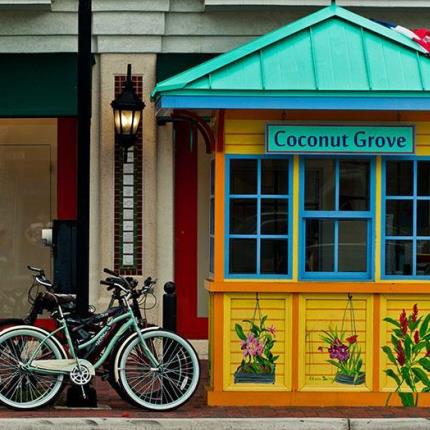 Anecdotally, there’s no shortage of tourists stepping off the big red bus touring through Coconut Grove. There’s also no shortage of visitors dining at the Grove’s restaurants, shopping at its stores, staying at its hotels and attending its events, locals say.

It was a Monday afternoon and GreenStreet Café was bustling with patrons, owner Sylvano Bignon said.

“It’s been a phenomenal summer,” Mr. Bignon said. “Miami used to be 100% tourists. Now it’s a good blend between [tourists] and local people.”

Although Grove hotels lodged only 1.5% of Miami’s visitors last year, tying with Key Biscayne, its hotel occupancy rates remained in the 60th to 80th percentiles, according to STR Inc. In fact, about 27% of all Miami-Dade County visitors went to Coconut Grove last year, said Rolando Aedo, senior VP for marketing and tourism at the visitors bureau.

Coconut Grove is Miami’s oldest tourist magnet, and its Business Improvement District, a City of Miami board made up of local property owners and merchants, is dedicated to preserving and enhancing its commercial core.

“The Grove suffered the same downturn in business six years ago that I think everyone did in Miami,” said Marshall Steingold, past chairman of the Coconut Grove Arts Festival’s board of directors and current chair of its marketing committee. “But we’ve been coming back so strong.”

Vacant storefronts and restaurants are not as common as they once were, Mr. Steingold said.

But in the 30 years he’s known the Grove, he said, there are more dining options, and diversity in restaurants, than he’s ever seen.

“Tourists want authenticity,” he said. “They want an organic experience.”

The Business Improvement District has partnered with the visitors bureau to launch a digital marketing campaign, in which the neighborhood is promoted on travel websites.

Coconut Grove, specifically including CocoWalk and the Mayfair Hotel & Spa, ranked No. 8 in the top ten most visited Miami-Dade attractions by overnight visitors in 2014, according to surveys taken by the visitors bureau.

Last year, about 1 in every 5 overnight visitors stopped by the neighborhood.

Mr. Bignon, owner of GreenStreet Café, said the red buses carrying their mixture of tourists around have helped boost his patronage.

Another 120,000 or so visitors flock to the Grove every February for its three-day art festival, now in its 53rd year, Mr. Steingold said.

“The restaurants and stores definitely see an upsurge in business during that time,” he said. “Of course, many of them who come in from out of town want to stay in Coconut Grove at some of our hotels.”

This past February, Coconut Grove hotels averaged 77.5% occupancy, according to STR Inc. The neighborhood’s hotels share the city’s overall high occupancy rates. In February 2014, occupancy peaked for that year at 87% in Coconut Grove. So far this year, occupancy has stayed within the 65% to 85% range.

The Business Improvement District is now shifting its focus to the local community, said Manny Gonzalez, the district’s executive director.

The neighborhood wants to cater to its own, as well as outside visitors.

“Instead of it being 90% tourism and 10% local, we’re trying to go almost to 50/50,” Mr. Gonzalez said. “We’ve noticed that there is a correlation between businesses offering services to locals and their success, and we need to come back to that. We want to keep people working here, living here and playing here versus just counting on the tourism.”