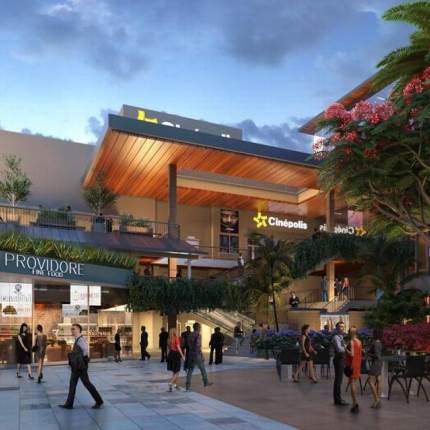 Michael Comras, president and CEO of The Comras Co. and a leading retail broker in Miami, is extremely bullish on the village of Coconut Grove.

Comras is part of the ownership group developing CoCoWalk, in partnership with majority owner Federal Realty Investment Trust and Grass River Property. He also sits on the board of directors of the Coconut Grove Business Improvement District.

Last month, the development group commenced construction and demolition work on the next phase of CoCoWalk’s redevelopment into a mixed-use complex. Demolition began this week on the eastern side of the CocoWalk, which will make way for a new 85,000-square-foot five-story office building (One CocoWalk) and 20,000-square-feet of street level retail space. The demolition of CocoWalk’s east building follows the start of a large-scale remodel of the property’s west side, now underway, that when completed will offer approximately 150,000 square feet of leasable retail space. The completed project, totaling 250,000 square feet of commercial space, is expected to be delivered in the fourth quarter of 2019.

In an exclusive Q&A with GlobeSt.com, Comras, who has more than 20 years experience as a retail broker and specializes in urban and suburban markets, shared his insight on how an attractive retail mix can transform a neighborhood’s appeal. After falling behind exciting districts like Wynwood, Midtown and Little Havana, he believes the once sleepy neighborhood of Coconut Grove is becoming one of Miami’s hottest dining and shopping districts.

GlobeSt.com: Tell us about the latest retail brands to ink leases in Coconut Grove and why are they finding the historic neighborhood attractive compared to other Miami destinations?

Comras: The boutiques opening and thriving in Coconut Grove today are changing as the district shifts to a retail mix that caters primarily to the local community after years of primarily serving tourists. The Grove is seeing a wave of new residential and office development as residents and office users gravitate toward urban neighborhoods that are well-located and easily walkable. This growth is luring retailers hoping to tap into a growing daily population.

Examples include national brands like Bonobos, eyewear brand Warby Parker, and cosmetic boutique Aesop, as well as local favorites like independent bookstore Books & Books and TKS, a Miami-owned surf and skate shop. Cipriani recently announced that it is bringing its third outpost of the Mr. C hotel brand to Coconut Grove, which is another boost for prospective retailers already eyeing the Grove.

GlobeSt.com: Why is the Grove experiencing a growth in the number of chef-driven concepts and national and international food concepts opening up?

Comras: Coconut Grove is drawing a variety of contemporary food and beverage concepts that are seeing success and, in many cases, expanding with more restaurants in the neighborhood. This is indicative of the loyal following they are building in the community. Take restauranteur Matt Kuscher, who opened the burger-and-beer joint Lokal in 2011, and about five years later delivered The Spillover. Maurizio Farinelli, another local restaurateur, is at the helm of several of the Grove’s most popular restaurants such as Strada in the Grove, La Rue Bistronomie and Farinelli 1937.

Add to this a newer breed of chef-driven restaurants such as Ariete led by Chef Michael Beltran and Harry’s Pizza, the concept by James Beard Award-winning Chef Michael Schwartz. Specialty coffee and café concepts are also brewing such as soon-to-open Blue Bottle Coffee, independent bookstore and café Books & Books and homegrown chain Panther Coffee. Recently, Le Pain Quotidien, an international bakery and café with locations in major cities in the US and abroad, also opened its first Florida location in Coconut Grove. Among the factors appealing to patrons is the Grove’s walkability, as the neighborhood consistently ranks as one of the most walkable communities in the country.

GlobeSt.com: CocoWalk is undergoing a multi-million-dollar renovation and expansion, and you are a part-owner of the JV. What are the types of retail tenants you’re looking to attract and why did the lifestyle center decide to add an office building?

Comras: Stylish boutiques, chef-driven restaurants, an open-air courtyard and a fresh, modern design are all in store for CocoWalk. The center’s new retail mix will feature well-known brands and local operators providing lifestyle, wellness and beauty services. Food and beverage options will include both fast-casual and sit-down restaurants operating during breakfast, lunch and dinner. The center’s second floor will cater specifically to personal care, with beauty and nails salons, a barber shop, makeup stores, and spa-related services.

The addition of an office component with the 85,000-square-foot One CocowWalk is the biggest boost to the overall lifestyle center and broader neighborhood because it creates a daytime demand generator. The whole notion of mixed use is a more efficient way to activate properties 24 hours a day and truly makes them part of everyone’s daily lifestyles. CocoWalk will remain open to the public throughout the phased renovation, with operating tenants including Cinepolis, Chase Bank, YouFit Health Club and The Gap, and delivery is expected in late 2019.

GlobeSt.com: Coconut Grove hasn’t seen a new office building in 30 years and now, three office projects are underway. Is there sufficient demand for the amount of office space coming online in the near future?

Comras: The introduction of three new office buildings, including the five-story One Cocowalk and Mary Street, will add creative office space. This new office product is already garnering significant tenant interest with over 50% of the space committed. Despite emerging as one of South Florida’s most sought-after office markets in recent years, Coconut Grove’s last new office building came online in 1989 – three decades ago.

The Grove already has 995,000 square feet of existing office inventory and the submarket’s total vacancy rate for Class A space has fallen to 1.0%, which points to the strong market fundamentals. The district is home to high-profile companies such as Sony Music, Arquitectonica, General Electric, Virgin Hotels and SapientRazorfish. Office users driving through the Grove today have an opportunity to significantly reduce their commute time, while enjoying access to Miami’s trendiest restaurants, boutiques, parks, top private and public schools, high-end residences and hotels. The additional daytime population will translate to more foot traffic for the retailers and restaurants at CocoWalk and in the surrounding district.

GlobeSt.com: The reinvention of the Grove has been taking shape for the past several years. What role is the Coconut Grove Business Improvement District (BID) playing in this transformation?

Comras: From funding new transit options, to keeping streets clean and presenting major events, the BID is taking action to ensure Coconut Grove’s commercial core thrives as the neighborhood strengthens its appeal as a residential, tourism and lifestyle destination. The Grove BID spends about $600,000 annually in security, sanitation and beautification efforts. Among the services it offers are landscaping, sidewalk improvements, and grants to qualifying business owners to improve their storefronts. The Grove has also launched an app-based shuttle service that ferries people around the neighborhood in electric carts, which is now up and running seven days a week. The service is free thanks to funding from the BID and area sponsors. BIDs, such as the one in Coconut Grove, are incredibly important as they help to facilitate the maintenance, walkability and lifestyle a community can offer.