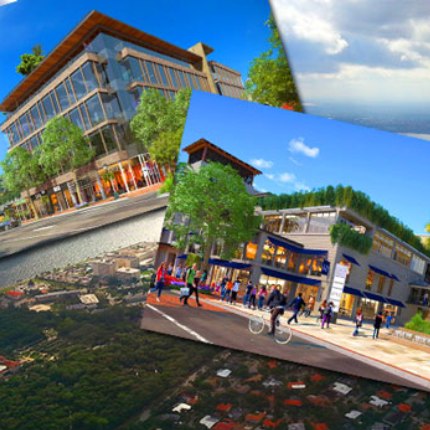 Coconut Grove has long played an important role in Miami’s transformation into a bustling metropolis.

Discovered in the early 19th century by mariners attracted to bubbling freshwater springs along its coastline, it was one of the city’s earliest settlements founded by maritime traders from the Bahamas and Europe. After its official founding in 1873, Coconut Grove went through several evolutions during the next 100 years to become a tropical oasis for artists, intellectuals and modern-day swashbucklers.

By the 1980s, the bohemian village began another metamorphosis into a hangout for teenagers cruising through Main Highway and Grand Avenue and college students partying at local bars and nightclubs. In 1990, the open-air retail center CocoWalk opened its doors, signaling a push to make Coconut Grove more commercial by bringing in national chains like The Gap and AMC Theatres.

However, competition during the early 2000s from burgeoning neighborhoods and retail districts in Brickell, South Miami and Coral Gables severely impacted Coconut Grove’s commercial appeal, driving tourists and locals away. There was also a lack of new residential development, causing buyer interest to wane in the neighborhood.

“I have worked in the Grove for the last seven years,” said Karen Elmir, a Realtor associate with Cervera Real Estate. “The market for condos was almost non-existent. It was hard to sell anything above $800 a square foot.”

Coconut Grove’s outlook began to improve in 2012, when Terra unveiled plans to redevelop the former site of the Grand Bay Hotel into a pair of twisty luxury towers designed by Bjarke Ingels. The company completed the 20-story buildings, called Grove at Grand Bay, and sold out the project’s 96 residences last year.

“New preconstruction prices are selling at $1,000 a square foot,” Elmir explained. “Five years ago, those prices were unheard of.”

She noted the market for single-family homes in Coconut Grove has also skyrocketed, with prices for those properties jumping 20 percent over the past five years.

The influx of luxury condo buyers has given commercial developers the confidence to take risks on underperforming retail and office properties in the Grove. Upon acquring CocoWalk for $87.5 million in May 2015, the joint venture between Federal Realty Investment Trust, Grass River Property and the Comras Company announced plans to revamp the four-story, 198,000-square-foot shopping center’s retail mix in order to cater to the neighborhood’s new demographics.

The owners are now planning to construct a 78,000-square-foot Class A office building on the site, which they hope will boost daytime foot traffic and create a built-in customer base for CocoWalk’s retailers and restaurants. Renovations to the existing retail spaces are already underway.

Comras has also brought in new retailers to the Engle Building at 2980 McFarlane Road. In 2015, an entity owned by Arquitectonica founder Bernardo Fort-Brescia, his son and another relative renovated the property. Since then, Comras has brought in tenants such as Harry’s Pizzeria, Panther Coffee, Buro Group, Bonobos, Le Pain Quotidien and Poke305. Books & Books is opening an outpost on another major Grove Street at 3409 Main Highway.

The changing retail landscape has caused occupancy and rental rates to slip over the past 12 months. According to a Q3 2017 retail report by JLL, the occupancy rate dropped 1.1 percent to 97.5 percent compared to the same period in 2016. Asking rents took a dive from $66.30 a square foot last year to $62.78 a square foot in the third quarter.

The city of Miami offers a free trolley service throughout Coconut Grove that also takes riders to the Coconut Grove Metrorail Station near U.S.1 and Southwest 27th Avenue.

“The past five years have seen a dramatic comeback in Coconut Grove, which is enjoying a commercial and residential resurgence. The neighborhood is seeing exciting dining, shopping and entertainment concepts move in,” George Spillis, principal of Grass River Property.

Most expensive home on the market

$25 million for a 7,000-square-foot waterfront mansion with five bedrooms and four-and-half bathrooms at 3080 Munroe Drive.

Least expensive home on the market

Terra’s success with Grove at Grand Bay led to the company and other builders to announce more high-rise and boutique projects in the neighborhood.

“After the downturn, Grove at Grand Bay was very well received,” said Oscar Rodriguez, principal of ROVR. “That’s when we started seeing interest from a myriad of buyers in Coconut Grove, including buyers from overseas and other parts of the U.S.”

In February, developers Urban Atlantic Group and Oak Ventures announced plans to build the 52-unit boutique condo project Arbor behind CocoWalk. Units will range from 1,400 to 2,000 square feet and start at $799,000.

Meanwhile, Terra has several new projects in the works that it is developing in conjunction with other big-name real estate firms. Terra and The Related Group teamed up on Park Grove, a three-tower project with 297 residences ranging from $1.95 to $14 million. The firms also want to create a new office development at 2859 Tigertail Avenue and 2765 South Bayshore Drive.

Additionally, Terra is partnering with Mayfair Real Estate Advisors to convert a former public parking garage into a mixed-use office building. Terra paid $16 million for the 402-space garage at 2860 Oak Avenue in January of last year. The plan is to create 75,000 square feet of Class A office space, retail on the ground floor and public parking.