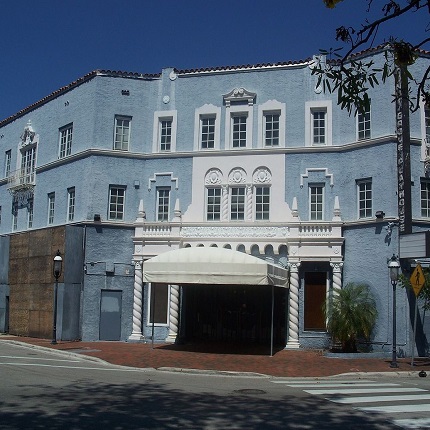 A historic building in Coconut Grove is in limbo while the landmark awaits its fate.

Will it be restoration or the wrecking ball, or both?

It’s graffiti and a code violation playing out as the latest drama at the iconic Coconut Grove Playhouse.

So what’s all new at the old playhouse?

“I was stunned to see the code violation was limited to an overgrowth of a tree. When you look at the building, it’s clear it’s derelict and falling apart.” David Winker speaks for a citizens’ group that wants a say in what happens to this nationally historic-designated theater.

The back and forth about what to do with the playhouse has been going on for some time. In the plan to save the theater, Miami-Dade County leased the property from the state, partnered with Florida International University and GableStage in an effort to restore function and glory.

But all that is on hold for a court fight over whether to preserve this almost century-old structure as the historic preservation board voted, or just restore the front, demolish most of it, and build something new.

At a commissioner’s meeting a year ago, Richard Heisenbottle of R.J. Heisenbottle Architects promised: “This project will get done in one form or another. Let’s make sure it gets done right.”

But since that time, the building has gone even more downhill, tagged with graffiti and suffering from neglect. The first public look at the roof, shot by drone video, shows it is exposed to the elements and leaking, according to the roofers.

“There comes a point where it just appears to be condemnation through neglect,” Winker said.

The next step is a court hearing on Tuesday, June 16, to see if the historic designation of the building can stand. However, the hearing will have to be on Zoom because of the coronavirus pandemic. There are people who want it delayed until it can be heard in-person and when people can show up to court and weigh in.