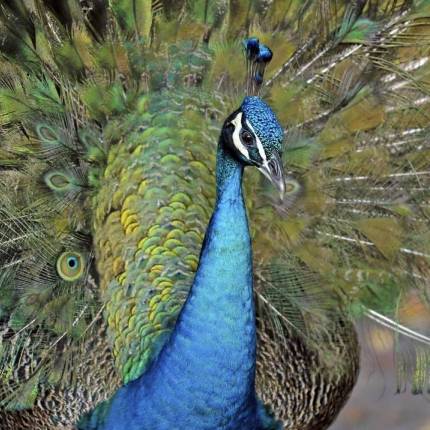 Andres Candela once felt lucky to live in his North Grove home. But now, he told Miami city commissioners at last Thursday’s meeting, the massive infestation of peacocks has ruined his and his wife’s quality of life.

Peacocks have control of his neighborhood, he said. They mate into the night, poop in large piles and scratch cars as they travel in packs of 20 to 40 or more.

Candela told the commission the birds are ruining the last years of the couple’s lives in the place they once loved.

“I don’t want to remain forgotten in a filthy, dirty peacock land as hostage to a group of birds,” he said. “I think that is more than unfair.”

Commissioners reasoned on the side of upset residents, voting unanimously to amend the charter to allow for trapping and removal of excess peacocks from the city. The proposal, which was introduced by Commissioner Ken Russell in October, seeks to lessen the peafowl population using a humane management plan implemented by Rancho Palos Verdes, California. The commission did not specify how many would be removed to a new, unpopulated location.

The birds have started causing enormous property damage, Russell said at Thursday’s meeting. He showed the crowd a photo of a city employee’s Toyota Prius on an iPad. The sedan was deeply scratched on all sides. The car will definitely need a paint job, Russell explained. Peacocks see their reflection on the side of a car, mistake it for a rival and attack with their beaks.

“When it came to property damage that’s when I knew we had to take some kind of action here to regulate,” Russell said.

The city council in Rancho Palos Verdes said residents and birds co-exist much better now that excess peacocks are trapped and relocated to refuges where they can squawk, scream, and mate all night if they wish.

But the peafowl proliferation problem has long split feuding Grove neighbors. Some residents enjoy the colorful plumage and neighborhood oddity, but many feel that the creatures are dangerous and diminish their quality of life.

The peacocks used to stay on one street in the Grove, said Nancy Benovaich, president of the Bay Heights neighborhood association.

But now their numbers have grown and they’ve spread to Coral Gables, Key Biscayne, up north to El Portal, down south to Palmetto Bay and number close to 600. They’re proliferating beyond imagination, she said.

The birds traipse through the gardens, eat plants and leave large piles of poop. One North Grove woman’s dog died from an infection her veterinarian attributed to peacock feces, the Herald reported in 2017. The peafowl squawk year-round but it’s especially aggressive during mating season, one resident told the commission.

But mostly, some residents argue, the birds interrupt their every night. One resident even told commissioners an albino peacock swooped down on her dachshund with its talons while they were out for a walk around the neighborhood, but they were able to run away.

While some still feed the birds, others have lobbied for the birds’ removal since 2017. Benovaich has been working at a solution for three years.

“I got to the point where I recorded the squawking and the screaming and I put it on someone’s answering service,” she said. “And they said my god, I can’t believe this. And I said imagine it at 4 o’clock in the morning.”

“Can you imagine that?” she asked the commission. “We need some help.”