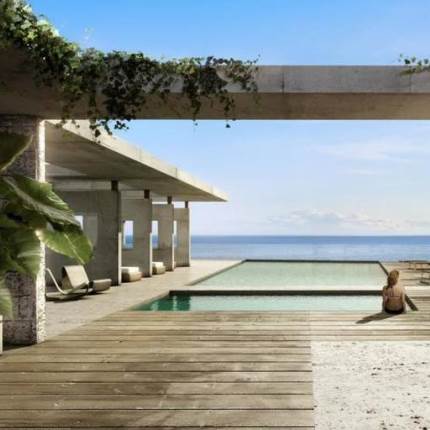 As other luxury condo developers are pulling back, ROVR Development is unfurling its plans for The Fairchild Coconut Grove, a boutique luxury condominium set to soon rise on the Coconut Grove waterfront.

The five-story Fairchild, with 26 residences, is the only waterfront development going up in the Grove, said Oscar Rodriguez, who is developing the project with Ricardo Vadia, both principals of ROVR. ROVR amassed the one-acre parcel through the acquisition of the former Bay Colony Condominiums, in the Grove’s Glencoe neighborhood.

Coconut Grove architect Max Strang ensured that The Fairchild will have a decidedly Grove feel, Rodriguez said. Incorporated in the design is local oolite limestone, native wood accents and clean white stucco as well as expansive outdoor terraces and private gardens. The sleek and modern inside spaces will be designed by Rafael de Cárdenas.

“In this day and age of concrete jungles and high rises and living with 300 or 400 other people, this provides an alternative for the person that wants more of a private experience,” Rodriguez said.

Dedicated elevators will lead to two to four bedroom residences ranging from 1,700 to 4,200 square feet, with prices from $1.4 million to $4.5 million, or starting out at about $823 per square foot. The Fairchild is scheduled to break ground in early 2017 and construction will take about a year and half, Rodriguez said. Sales and marketing, now underway, is being exclusively handled by ONE Sotheby’s International Realty.

The Fairchild, at 3581 E. Glencoe St., will also feature a spa, two rooftop decks, a pool and a bayfront deck that includes private boat slips available for purchase.

Rodriguez and Vadia both worked at Related Group for more than a decade and branched out on their own in 2009, merging their companies a couple of years later. They have developed student housing, affordable housing for seniors, luxury condos including a 100-unit project in East Edgewater currently in development and a 402-unit rental apartment development in North Miami, among other projects.

The Fairchild will be going up as other developers in the luxury category are pulling back. Significantly fewer foreign buyers are in the market than last year, as currencies in Brazil and Venezuela have tumbled. Developers have begun delaying planned condo projects, especially in areas off the water, including Auberge Residences & Spa Miami in the Omni district and Boulevard 57 in the Upper East Side.

“We are going forward because we believe this is so uniquely situated and boutique,” Rodriguez said. “It’s not investor driven. I believe the potential buyer is an end user. While the market is precarious, we think this type of product is insulated from that analysis. People fall in love with our sales center and if they want to buy, they buy.”

The Fairchild will be financed by buyers, who will put up a total of 50 percent in stages before and during the construction process.

While it’s true that, in general, boutique luxury developments appeal more to end users than investors, such projects can have drawbacks, said Peter Zalewski, a principal of the Miami real estate consultancy CraneSpotters.com, who closely tracks the preconstruction condo market. While such developments can be highly desired because of the exclusivity and privacy, higher maintenance fees because of the limited number of units can drive off potential buyers, he said.

Sales have already softened in the luxury category, and prices are expected to eventually follow suit, Zalewski said. Between January and June, eight luxury condo units closed in the Grove this year, at an average square foot price of $703, he said. In the Grove’s preconstruction category, there are six projects with 357 units proposed, planned or under construction, he added.

“I would characterize the market as over-saturated,” Zalewski said, noting that inventory levels in Coconut Grove are almost three times what is considered healthy. “Where you are in the market now, a buyer can be very selective and make the seller or the developer bow down and provide incentives. Two years ago the developer would have had the advantage.”

Rodriguez agrees being boutique and unique is not enough:

“It has to be in a great location. … In these days it is important to have a major marine and bay use, and we are very fortunate to have that with boat slips, kayaks and paddle-boarding. It is very beautiful — that’s what sets us apart.”