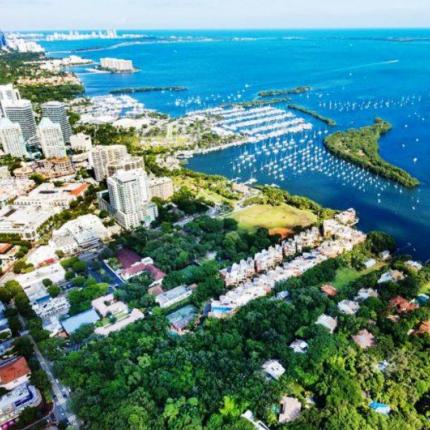 Despite the global uncertainty caused by the coronavirus, real estate prices in the Grove have only increased since this time last year, while total sales have hardly dipped.

These figures indicate that purchasing a residence in the Grove is becoming more expensive, especially when it comes to single-family homes. Nathan Zeder, a broker-associate with the Coldwell Banker affiliated Jills Zeder group, said that of 135 single-family homes currently for sale in Coconut Grove, only 35 are listed under $1 million.

In fact, according to the David Siddons Group’s “Q1 2020 Miami Real Estate Report: 5 Hottest Miami Real Estate Markets That Sell” analysis, the market for homes in Coconut Grove under $2 million is one of the best in Miami.

“The housing market (for single-family homes) is very strong,” said David Siddons, president of the group, which is also a Douglas Elliman affiliate, “when a good product comes up, it’s gone.”

Riley Smith, president of Berkshire Hathaway affiliate The Riley Smith Group, also told Miami Today that single-family homes under $1 million were in high demand and hard to come by. “The entry level (price point) for a house that doesn’t need too much renovation is around $800,000 right now,” he said.

According to Mr. Siddons, much of the single-family housing market in the Grove is being driven by families, who flock to the neighborhood for its acclaimed public and private schools. For example, in 2020 Niche.com ranked Ransom Everglades School in Coconut Grove the #25 “Best College Prep School” in the country and the #1 “Best Private High School” in Florida.

Aside from its schools, realtors say families and residents are attracted to the Grove for a number of reasons, some of which are environmental. According to Mr. Light, Coconut Grove has the largest tree canopy in southern Florida as well as one of the highest elevations in Miami, sitting at, on average, 14 feet above sea level.

Joe Higgins, a broker for Grove Town Properties, told Miami Today that the Grove’s unique vibe and location had much to do with its success. “It’s easy to sell Coconut Grove,” he said. “It’s just a dynamic and cool place to live; it’s very artsy, it’s very bohemian and laid back.”

“It’s one thing compounded on another with the Grove,” said Mr. Light, “between the shopping, dining, walkability, parks and marinas.” According to Mr. Light, the Grove boasts over 40 restaurants and no chain eateries.

While these factors have played a role in the continued residential price increase in Coconut Grove, Mr. Higgins said buyers with budgets well under $1 million could still find a home in the area, be it a condo, townhouse or single-family home.

“If you really want to be in Coconut Grove,” he said, “you could definitely find a one-bedroom condo for less than $175,000.”

As far as townhomes are concerned, Mr. Higgins said the “sweet spot” for one of these dwellings was around $725,000 for a three-bedroom. In addition, he said, a single-family “starter home” that may need some renovation could go for around $600,000 or even less.

Indeed, Mr. Smith said the Grove is home to multiple properties in need of renovation. However, he said he believed many buyers, particularly those from out of town, favored move-in ready homes. “People are looking for new construction or move-in ready,” he said. “It seems like people coming from somewhere else don’t have the appetite to renovate.”

Both Mr. Smith and Mr. Siddons acknowledged an influx of out-of-state buyers relocating for a number of reasons, including better tax rates and highly-rated schools.

While Mr. Zeder said we could only wait and see where the Coconut Grove market is headed, he said he remained cautiously optimistic about the area. “I have nothing but great expectations for the Grove,” he said. “It’s an amazing area, in an amazing location, and it doesn’t have a lot of land. Generally speaking, when you don’t have a lot of supply it becomes very intriguing for buyers.”

Mr Light, whose own office is at Cocowalk in the Grove, concluded, “My wife and I have lived here for ten years, and we would never leave.”