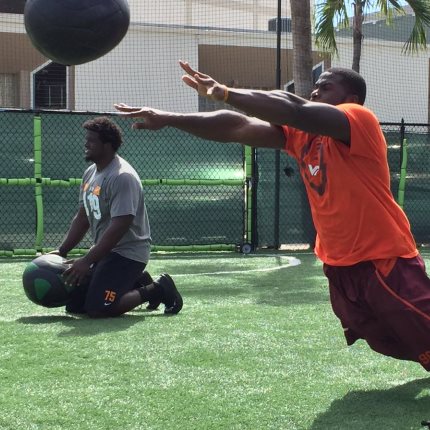 Leading up to the NFL draft players will be poked, prodded and tested in every which way.

With one exception- no one’s getting hit. That’s where Nick Soto comes in. He’s the co-founder of Elite U – a Coconut Grove gym that specializes in getting football prospects into the pros.

“It’s no longer about football for a while. It’s about running as fast as you can in short distances and getting your ‘agilities’ done right. It’s very, very specific towards a test that really doesn’t mean anything towards football – but means something towards getting drafted,” said Soto.

“We’re trying to showcase how athletic you are. So we specify that training for about 6 to 10 weeks,” said Soto.

Canes fans will recognize one explosive player working out at Elite U. Wide receiver Rashawn Scott, who has enlisted Elite U to crank up his combine results, aimed to improve his draft stock .

“I’ve been waiting for it. It’s fun. You only get one opportunity at it so you can’t be nervous about it,” said Scott.

Nick is training about a dozen players from schools around the country, but not all of them were invited to the NFL combine like Scott. Their fate will be determined at their schools’ pro days where scouts try to find a diamond in the rough.

Justin Malone, an offensive lineman out of Mississippi State, is looking forward to the challenge.

Others like South Florida native Jermaine Reve (Louisville) seek to make the most out of their time at Elite U.

“When Pro Day comes, that’s my chance to wow every coach that’s going to be there,” said Reve.

Soto, whose dream of being an NFL player fell short, is making it his mission to help others reach their dreams.

“I live vicariously through them so it’s a pretty cool deal  for me,” said Soto.