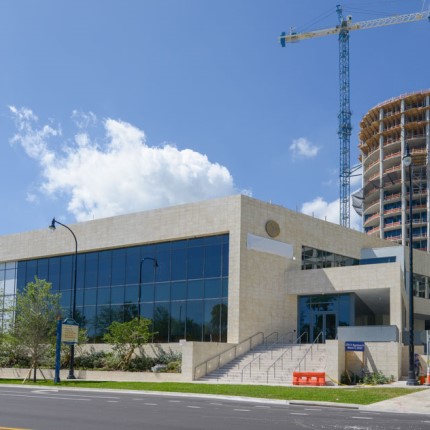 Nearly four years after selling its former headquarters for $55 million, Coconut Grove Bank is moving into its new space.

And while the address of the bank’s fresh digs remains the same, 2701 S. Bayshore Dr., the state-of-the-art building is a welcome update.

“This move comes at a pinnacle time for the bank — its 90th anniversary. It also sets the framework for our continued growth and expansion plans and our commitment to excellence,” said Rick Kuci, president and CEO of the bank.

The 30,000-square-foot headquarters sits on the same waterfront lot the bank has occupied since 1959. But the path to its new home got a kick start in 2013, when the bank sold its 5.2-acre headquarters site at 2701 S. Bayshore Dr. to an affiliate of Terra Group and the Related Group of Florida.

The developers purchased the site for $55 million and as part of the sale agreed to build the bank a new headquarters office. In addition to the bank’s new building, Terra, in partnership with Related, is also building the Park Grove luxury residential project on the site.

Dr. Philip Frost, Miami biotech scion and the bank’s largest shareholder, said that the bank is in a good position, in part because of its strong team.

“Coconut Grove Bank has experienced tremendous growth and countless accomplishments over the course of its 90-year history,” Frost said.

Coconut Grove Bank has $656 million in assets as of Dec. 31, making it the 15th-largest South Florida-based bank.