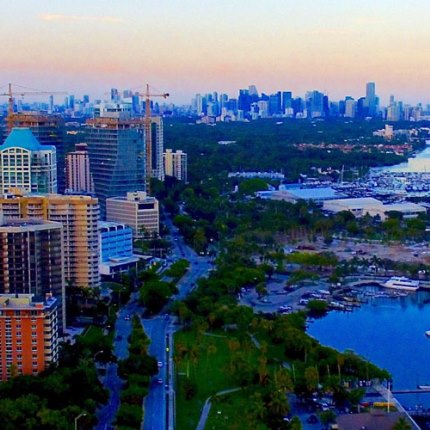 Coconut Grove, Overtown, North Beach in Miami Beach, and the Arts & Entertainment District are among several areas that have emerged as the hottest real estate submarkets in greater Miami as the fourth quarter gets under way, according to recent interviews with real estate analysts and developers.

“These emerging areas are seeing a renaissance of activity,” said Alex Zylberglait, a senior vice president for brokerage firm Marcus & Milichap. “Pricing is going up as land is becoming [scarcer].”

“What Terra is doing is going to take the Grove into a whole new paradigm shift,” Morris said in an interview. “It is only going to get better and better.”

Investors certainly seem to think so. In March, an entity controlled by famed Miami architect Bernardo Fort-Brescia renovated the Engle Building at the corner of McFarlane Road and Main Highway and announced a roster of new tenants including Harry’s Pizzeria, Panther Coffee and Clyde Butcher gallery. A month later, a group of Latin American buyers plunked down $2 million (10 times the last sales price) for a 10,502-square-foot commercial property in the West Grove.

And in May, a partnership between Maryland-based Federal Realty Investment Trust, Grass River Property and the Comras Co. bought the Cocowalk shopping complex in a deal valued at $87.5 million and unveiled plans to redevelop the center and include a new tenant mix.

A quiet community with single-family homes and low-rise apartment buildings, North Beach is about to undergo a significant transformation once developer Terra Group breaks ground on its 20-story, 64-unit luxury condominium at 8701 Collins Avenue, Zylbergait said. “In the next few years, you are going to see more higher-density, mixed-use projects in North Beach,” he said. “You will also see the development push westward to the Intracoastal side.” New York real estate investor Guy Smilovich is quite bullish on North Beach. He said in an interview that he bought in the neighborhood because the area has “long-term value.” Smilovich is moving forward with renovating his Art Deco building at 8200 Harding Avenue. It will connect via a courtyard to a new 13-unit luxury apartment building going up on a vacant lot at 8204 Harding Avenue, with a mechanical-lift parking system. The two properties, approved by Miami Beach officials earlier this year, are located one block west and three blocks north of Terra’s 8701 Collins project. Smilovich also owns a four-unit building at 8144 Harding Avenue, which he might convert into a hotel.

Three years after NR Investments pitched its tent in the Arts & Entertainment District, which connects Wynwood and the Design District, the neighborhood is well-positioned for major growth, said company principal Nir Shoshani.

In 2012, NR acquired the Filling Station Lofts at 1657 North Miami Avenue and transformed the 81-unit mid-rise tower into a rental building. Since unveiling plans last year for the 37–story condo tower Canvas, NR has sold more than 200 of the 513 units, Shoshani said. His company also owns a 1-acre parcel on North Miami Avenue between Northeast 14th and Northeast 15th streets, where NR hopes to build a mixed-use project with hotel, office and residential components.

Other major developers are also banking on the Arts & Entertainment District. The Related Group is planning a three-tower mixed-use site on 2.7 acres at 1400 Biscayne Boulevard that it purchased for $57.7 million last year. The residential element will be managed by luxury hospitality company Auberge Resorts.

Shoshani said the neighborhood has all the key attributes for creating an urban village, such as being close to public transportation and high-density zoning. “In four to five years, you will have a neighborhood that has an entirely new identity.”

Nearly a decade after developers Joe and Jack Cayre set about transforming a 29-acre former rail yard into Midtown Miami — a self-contained neighborhood with four residential towers and a shopping center anchored by big-box retailers — some new developments are on track to enter the picture in the coming months. In September, the Related Group and Dezer Properties broke ground on the Hyde Midtown Suites & Residences after selling 70 percent of the 410 residential units.  Just east of the abandoned Florida East Coast railroad tracks near Midtown Miami, developer Alex Vadia has submitted plans to the City of Miami for a massive residential, retail and restaurant complex.  “There hasn’t been much new development coming to the Midtown market for about eight years,” said Tony Cho, CEO of Metro 1 Realtors. “With all the activity taking place in Wynwood and the Design District, Midtown is poised to benefit from the spillover effect.”

In the historically African-American neighborhood of Overtown, a pair of massive mixed-used projects near downtown Miami could serve as catalysts for more redevelopment projects.

The construction of All Aboard Florida’s MiamiCentral complex near the Miami-Dade government center is well under way. In June, crews began pouring the foundations for a five-block project stretching along Northwest First Avenue. MiamiCentral is where All Aboard Florida’s commuter rail line from Orlando to Miami will make its last stop. The site will include five rail tracks, a train depot, four towers, a garage, almost 1 million square feet of office and retail space and more than 1,300 apartments, condos and hotel rooms.

Developers for the $1.7 billion Miami Worldcenter are preparing the 27-acre site for construction, which is scheduled to begin by the year’s end. The project includes a 500-unit Paramount Miami World-center condo tower that will be constructed atop a 765,000-square-foot retail and entertainment center anchored by Macy’s and Bloomingdale’s and developed by Forbes and Taubman. A 1,800-room Marriott Marquis hotel and convention center, as well as a tower by Orlando-based developer ZOM, with 429 luxury rental apartments, are also part of the project.

Despite a Goldman Sachs report that Taubman has “the potential to not go forward with (sic) World Center,” a Forbes executive said the national shopping center developer remains committed to the project, the Miami Herald reported in June.

Miami Worldcenter is receiving $88 million in tax rebates over 12 years for creating jobs for local residents of Overtown and other Miami neighborhoods.

Overtown’s potential is generating significant investor excitement, Paramount developer Daniel Kodsi said during a September real estate forum about Asian buyers, noting that 40 percent of the 60-story tower’s 513 units have been sold and 13 percent of the buyers are from China, an emerging market for Miami condo developers.

Atlantic Pacific Communities and Palmetto Homes are constructing Island Living, an eight-story building with 70 units and 5,000 square feet of ground-floor commercial space at 1201 Northwest Third Avenue. At least 50 percent of the units will be set aside for buyers with incomes not exceeding 60 percent of the area’s median level. The project is financed with bonds issued by the Southeast Overtown/Park West Community Redevelopment Agency.

The July sale of a Little Havana super-market shows how hot properties in the historic Miami neighborhood have become. Last year the commercial building’s market value was about $605,000, according to Miami-Dade County property appraisal records. The property flipped for almost double the price and was sold to Calle Ocho Marketplace for $1.06 million. The market value for several neighboring properties has also ballooned by $200,000 to about the $500,000 mark.

Further east, closer to neighboring Brickell, Megacenter Brickell, a company that lists Pablo Wichmann and Patricio Ureta as managers, purchased almost three-quarters of an acre on both Southwest Seventh and Eighth Street at Fourth Avenue for $7.93 million, or about $253 per square foot. The previous owner, Key Biscayne-based London Real Estate Co., had paid $1.2 million for both lots in 2011.

Scott C. Sandelin, a national retail specialist for Marcus & Millichap who co–brokered the Calle Ocho Marketplace deal, said the supermarket was the fifth property in nine months that his firm had handled in Little Havana.

“Investors are taking notice of the opportunities to capitalize on the urban renewal in eastern Dade County,” Sandelin said in a statement. “We expect that the demand for properties will continue to escalate with new developments.”

Realtors have also begun marketing Little Havana as Miami’s next frontier. In April, downtown Miami real estate agency Fausto Commercial Realty took a group of real estate professionals, from bank loan officers to developers, on a promotional tour of Little Havana as part of an effort to illustrate that the historic neighborhood, home to many Spanish–speaking immigrants from Latin America, is primed for redevelopment.

One developer already making headway is the Astor Cos., which recently received $46.7 million in bank financing for its InTown mixed-use project now under construction at 1940 Southwest Eighth Street. The site, which includes a 312-unit condo tower, eight townhouses and 18,000 square feet of ground floor retail, is expected to be finished by the end of 2016.

In June, Astor founder Henry Torres said he is marketing the condo as “affordable luxury” units, adding, “I truly believe in Little Havana.”

Other developers targeting Little Havana include the Chetrit Group, with plans to build four 60-story towers along the Miami River.

Historic preservationists, however, have been running interference with the city of Miami to halt efforts to rezone the area for higher density and thus entice new development. They claim the proliferation of high-rises in Little Havana would destroy the neighborhood’s character. Earlier this year, their activism led to the Riverview Historic District, which protects a few square blocks of east Little Havana that housed Latin American refugees and immigrants who arrived in the United States during the first half of the 20th century.

For many years, tony Coral Gables had avoided the type of heavy development that has swept through Miami and Miami Beach. Not anymore, said Masoud Shojaee, chairman of development firm Shoma Group, which joined forces with developer Ugo Colombo’s CMC Group to build the Collection Residences, a 128-unit, 10-story luxury condominium, in the heart of Coral Gables. The Collection joins a slew of high-density projects that are under construction or in the planning stages.

In July, the Coral Gables city commission greenlit the Mediterranean Village at Ponce Circle, billed as the largest development in the city’s history with more than 1 million square feet of hotel, condos and shopping on 6.7 acres. Other projects include an Aloft Hotel being built on Le Jeune Road and 33 Alhambra, a proposed 16-story residential tower that would take up most of a city block.

“When I started purchasing land in Coral Gables four years ago, there was nothing moving in the city,” Shojaee said. “There was no new construction. Today, it is very difficult to find a property. We got in early.”