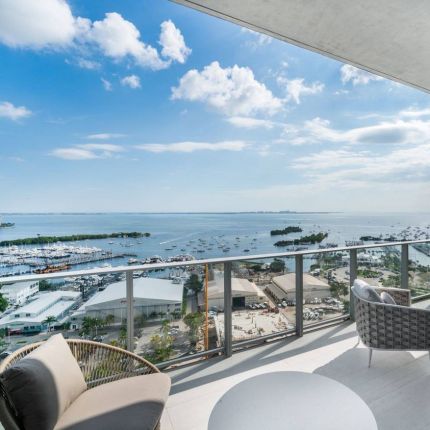 Founded in 1873, it’s as intoxicating as its tropical-theme name. In the last three years, its residential and commercial markets have been undergoing a revitalization that has raised its profile.

“Coconut Grove,” the 1967 tune by The Lovin’ Spoonful, where “nothin’ matters/No mad, mad world and no mad hatters,” sums up its leave-your-worries-behind-and-be-happy appeal.

Coconut Grove is, indeed, the perfect place to go on permanent vacation: The lifestyle is laid back, the landscape is lush and the living is luxurious.

Coconut Grove is dominated by single-family residences, many of them built in the 1930s and ’40s.

There are only a few condo developments. Yacht Harbour, which dates to 1975, has 138 units. The 425 units in the three high-rises at Grove Isle, a 20-acre island, were completed in 1982, the same year Grove Towers, which has 99 units, opened.

In 2016, the beginning of the neighborhood’s renaissance, they were joined by Grove at Grand Bay, a 22-story two-building development with 99 units. One Park Grove, the newest, has 72 units in its trio of towers. It will be completed early in 2020.

WHAT MAKES IT UNIQUE

Coconut Grove has a strong sense of community.

It’s a walkable neighborhood whose many parks, along with the beaches along the ocean, are natural gathering spots. It’s minutes from Key Biscayne and the Miami International Airport and has great retail shops and dining.

Coconut Grove, which is undergoing a development renaissance, has an influx of new dining and shopping options.

CocoWalk, an upscale open-air shopping center, has been renovated and will reopen early next year with new tenants including a variety of eateries and personal services.

Several new restaurants are bringing in diners from all over Miami. They include Tigertail + Mary, a farm-to-table spot in the One Park Grove development that was opened by James Beard award-winning chef Michael Schwartz and that serves everything from New York strip steaks to suckling pig; and Bellini, the Italian restaurant in Coconut Grove’s new Mr. C Hotel that features rooftop dining.

Regatta Harbour, a new 100,000-square-foot retail development that will open in the first quarter of 2020, will have several restaurants, including Afishionado, the latest boat-to-table dining concept by Bravo “Top Chef” winner Jeremy Ford.

Coconut Grove’s main cultural attractions include the Vizcaya Museum & Gardens, which has an early 20-century subtropical-style Italian villa with 34 decorated rooms and 10 acres of formal gardens that feature century-old plants.

The annual Coconut Grove Arts Festival, held on President’s Weekend in February, is one of the largest outdoor arts festivals in the country. Started in 1963, it features 300 artists and attracts some 120,000 visitors.

Coconut Grove has more than a dozen green spaces, including Peacock Park, which covers 9.4 acres and has basketball courts, a softball field, two soccer fields, a children’s playground and a large open field suitable for a variety of sports, and the Barnacle Historic State Park, which has a 19-century home and replicas of two Victorian sailboats.