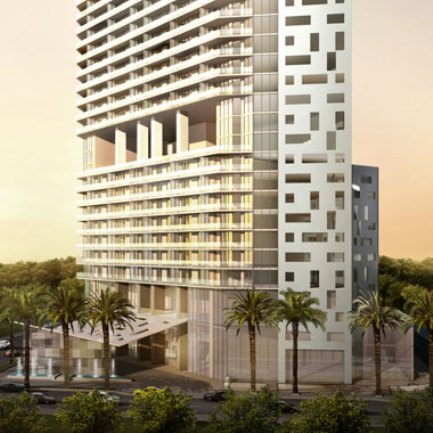 The first condominium to launch in the Miami’s central business district since the last real estate cycle has sold more than 220 units in less than four months of its marketing launch.

Newgard will break ground on Centro this fall and open to residents in early 2015. Centro residents will move into a much different Downtown Miami than we saw a decade ago. Slews of new shops, restaurants, hotels, and cultural arts and entertainment venues are now part of the urban core.

“Miami’s central business district has been largely overlooked this development cycle, but our sales success thus far proves there is clearly demand for this type of unique product in this neighborhood,” says Harvey Hernandez, chairman and managing director of Newgard Development Group, the project’s developer. “Centro offers a truly urban live-work-play lifestyle in the center of the bustling metropolis that is Downtown Miami.”

With Downtown Miami’s emergence as a pedestrian-friendly district, Centro is being developed without a built-in parking garage. Residents of the 37-story tower will have access to a fleet of on-site Smart Cars through a partnership with the Car2Go vehicle sharing program. Residents can also tap into cost-effective transit options close to the tower, including the Miami Trolley, Metromover and Metrorail, which provides access throughout Miami-Dade with frequent direct service to and from Miami International Airport.

Venues are close to building include the Adrienne Arsht Center for the Performing Arts; the Miami Art Museum and Miami Science Museum at Museum Park; the American Airlines Arena. And just blocks away from Centro, construction has begun on a 37,000-square-foot Whole Foods Market and entertainment block that will include upscale theater Silverspot Cinema.

Newgard partnered with Yves Béhar, the award-winning celebrity designer and founder of fuseproject, to create the project’s interior design concept. As the mastermind behind forward-thinking product designs such as the JAMBOX by Jawbone (the mobile headset and portable speaker company) and SodaStream, Béhar’s vision for Centro combines sustainable designs with a modern, efficient, integrated lifestyle.

“Centro will include cutting edge design and amenities tailored for a modern life,” says Alicia Cervera Lamadrid, managing partner of Cervera Real Estate, Centro’s exclusive sales and marketing firm. “The tower is designed to embrace the energy of Downtown Miami, with a vibrant cultural scene and bustling nightlife at your doorstep, all at an undeniable value to buyers.”