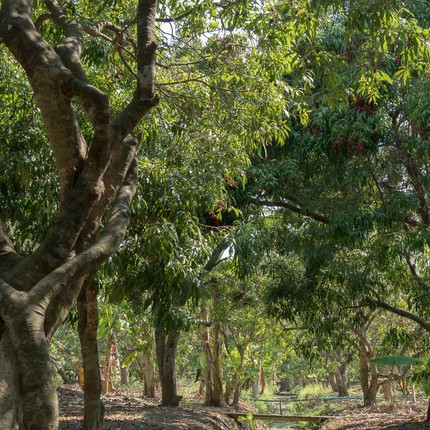 Miami’s Historic and Environmental Preservation Board listened and, in a surprising decision, overruled the city’s building department by rejecting a tree removal permit issued to a developer.

It was a victory for residents who live along a lush South Grove street one of them described as a “tunnel of green” and could serve as an example for people in other neighborhoods engaged in disputes to curtail development, said their attorney.

When neighbors saw the permit posted on the mailbox, they appealed to the preservation board, which voted unanimously to grant the appeal, ruling that Phillips should revise his site plan and not chop down trees. Phillips can appeal the board’s decision to the city commission. 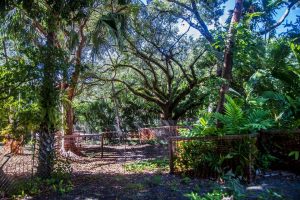 View of trees at 3834 El Prado Blvd., in Coconut Grove, where neighbors challenged a developer’s plans for a new house on the lot and won their appeal. (PHOTO CREDIT: Pedro Portal PPORTAL@MIAMIHERALD.COM)

A 60-foot lychee tree with a 50-foot canopy is the main impediment to Phillips’ blueprint, which the building department agreed was in conflict with the proposed south driveway, septic tank and drainfield.

“But the tree sits within the 15-foot setback, not within the buildable area for the house, so according to city code there is no justification for its removal,” Winker said.

The huge lychee should also be classified as a specimen tree designated for preservation, according to the city’s definition.

“It’s a legal specimen tree, according to Miami 21 code and cannot be taken down,” said Tucker Gibbs, who lives next door. “We’re not asking to prevent the construction of a large house. We’re asking for a house that fits without pushing all the landscaping off the property.”

Tucker was one of 15 residents who spoke at the meeting, all in favor of preserving Coconut Grove’s verdant canopy and jungle ambiance. They argued the trees do not restrict the developer’s ability to build a spacious new house.

“I moved here for the tree canopy,” said Walter Ringwald, who lives across the street and a native of France who moved to Miami from New York. “Even people in Europe know Coconut Grove is unique. We have the responsibility to take care of it. I’m not against construction as long as we have the common sense to make it reasonable and respectful. If we all take so many trees, it’s not going to be Coconut Grove anymore.”

Barbara Lange said neighbors fear the proliferation of large, white, modern, boxy houses is spreading into their section of the Grove and called the proposed El Prado house “an eyesore and an insult to our neighborhood.”

Chris Baraloto, an FIU tree biologist newly elected to the Coconut Grove Village Council, said he has not found another lychee in the Grove except one at the Kampong that is much smaller.

“The developer’s plan, assuming all relocated trees survive, would reduce tree volume by more than half, and the mitigation plantings would restore only 2 percent, while 43 percent of the canopy would be lost, with only 1.7 percent restored by mitigation,” Baraloto said. “We should preserve the lychee for biodiversity and the eco benefits large trees provide.”

During two and a half hours of discussion, board members told Phillips he should tweak his site plan to build in harmony with the existing trees, as other developers have done, and not treat the trees as “inconvenient.” They suggested ways he could move the septic tank and drainfield, alter the driveway or change other elements that would not necessitate tree removal or relocation.

But Phillips argued he had already revised his blueprints twice at high cost to comply with guidelines from the building department, which approved his plan. He defended the size and design of the house, which he said will look nothing like the “sugar cubes” that he also detests, and his abundant landscaping plan which, given time, will make the property more attractive. Phillips, who lives in the Virgin Islands and Palmetto Bay, said he cares deeply about the neighborhood and originally conceived the house so that he and his parents could live there.

“Unfortunately, keeping the lychee is a nonstarter for me. It doesn’t belong there and nothing grows under it,” Phillips said. “You’re asking me to sacrifice my entire plan to accommodate one tree. I don’t think that’s fair or reasonable.”