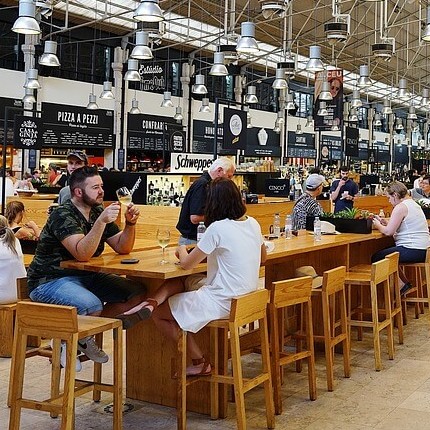 Coconut Grove is about to have its first all-vegan food hall.

Already open in Coconut Grove, the VShops is set to burst with an array of new plant-based eateries.

Right now, the spot is home to the well-known Choices Café and an entirely new concept, Neo’s Blender, a smoothie and juice spot geared toward kids but offers plenty for adults too.

The food hall will eventually include seven concepts. “We will be announcing each new vendor just before they launch — we want to keep people guessing,” Choices president Lori Zito says. “The vendors are already all confirmed.”

“With the rise of the plant-based movement, and with so many new vegan eateries popping up in Miami and beyond, [Choices Café’s founder Alex Cuevas] noticed that he was still never able to enjoy a wide variety of choices at food-hall-type venues — whether in traditional food-court settings or even with the recent rise of upscale food halls,” Zito says.

Instead of waiting for Miami’s new food hall to cater to vegans and vegetarians, Cuevas decided to make his dream of an all-plant-based food hall a reality.

“He connected with like-minded investors and operators to start Miami’s very first 100 percent vegan food hall,” Zito says. “His vision was, and is, to create a space with a diverse range of all the amazing types of food a vegan would want to have in one place.”

The latest VShops concept, Neo’s Blender, was inspired by Cuevas and Zito’s baby son, Neo, who is vegan and loves smoothies.

The menu reflects both indulgence and health.

“Guests will be able to enjoy some very decadent smoothies that are simultaneously good for you.”

Neo’s also offers a kids’ menu with pintsize versions of the smoothies so parents don’t have to pay for a full size.

The owners anticipate the next five shops to open throughout this spring and summer, about one per month.

“By fall 2018, the VShops should be at capacity, with all its vendors fully operational,” Zito says.