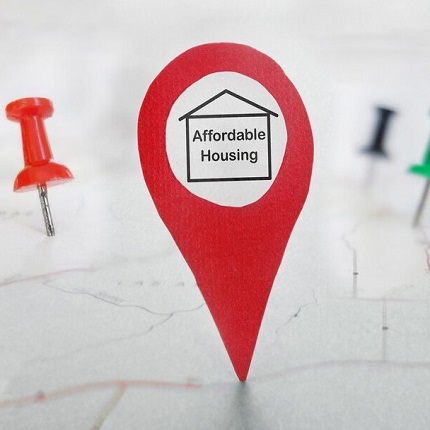 With its recent designation as Little Bahamas, neighborhood leaders in Coconut Grove’s historic West Grove section have renewed hope for holding on to what’s left of its storied Black heritage and persuading developers to provide homes that locals can afford.

To that end, the conversion of the county’s former Frankie Shannon Rolle Center at the corner of U.S. 1 and 37th Avenue is nearly done.

Developer Cornerstone Group will unveil in December an eight-story building with 191 apartments, including 79 of them priced at below market rents for lower income families.

In addition, the complex also eventually will be home to an Aldi discount grocery store and a Starbucks coffee shop. Partner Lenny Wolfe said Cornerstone recognized the Grove’s Little Bahamas area was a food desert that needed a value-priced supermarket like Aldi. And the Starbucks could provide a communal space for people to work and buy coffee.

However, there’s concern the recent selection process for the affordable rentals in the new Platform 3750 multi-use building reflects the gentrification that’s essentially wiped out the historically Black neighborhood over the past several decades.

It’s expected many of the people who will be selected as tenants of the lower-priced apartments are from everywhere but Coconut Grove, due to guidelines set forth by federal housing officials for the recent apartment lottery.

Rebecca Wakefield, Miami-Dade County’s District 7 chief of staff, said she and her colleagues worked to make sure members of the West Grove community received as much information as possible to be ready for the affordable apartment lottery. To help with that, the county held public meetings for local residents.

U.S. Department of Housing and Urban Development regulations, though, require that affordable housing options be available for all of a county’s residents. Still, West Grove residents were encouraged to apply for the upcoming affordable apartments and reimbursed for the $85 fee to apply to land a lease in the new apartment building. As expected, there was tremendous demand in a county where apartment rents have ballooned during the pandemic, and prices of single-family houses and condominiums have soared.

In about an hour after the Aug. 23 lottery started for the apartments, it was stopped at 450 applicants for the 79 affordable dwellings. Applications are being processed to see which applicants met the financial criteria and will get one of the apartments.

For Sylvia Jordan, executive director of Coconut Grove’s Cares Inc., a nonprofit that provides services for school children in the community, there’s a feeling of déjà vu. Jordan, 75, recalled volunteering in West Grove when Saint Hugh Apartments, an affordable housing building, opened in the 1980s. She was dismayed to find out it was too expensive for many Grove residents and became home to many University of Miami students whose parents paid for them to live there. She considers that a housing “fiasco” that helped lead to today’s gentrification.

Jordan thinks the new apartment building is the latest example of displacing the community’s longtime residents. She has watched how the children she works with and their families have been priced out of the Grove, a situation she called “out of control.”

“These are the great-grandchildren of people who were settlers in this community,” said Jordan, who has worked in the neighborhood since 1968. “Now the kids live as far as Homestead or Overtown. Many people from this community had to move, because they can’t afford to live here. Their ancestors built Miami and now we forget that.”

Wakefield is aware of gentrification’s pitfalls and how it has changed Coconut Grove, particularly the Little Bahamas section on the west side.

“Gentrification is a real thing and it’s really hitting that community in particular,”  Wakefield said. “It’s right on U.S. 1 and walking distance to the Metrorail. It’s emblematic of what’s happening across the county. As a community we don’t value our history enough.”

Miami Commissioner Ken Russell is working to slow gentrification by supporting affordable single-family homes and changing zoning laws that would allow a variety of residential developments in Coconut Grove.

Meanwhile, for many families there with little resources, there remains an allure to sell their older properties to developers for large amounts of money. The developers have typically demolished the wood-framed bungalows and other homes and built modern, luxury houses in their places. These so-called “sugar cubes” — named for their shape and white color — are often sold to wealthy finance, technology and legal professionals.

Jordan plans to continue working for Grove residents, hoping to retain what sense of community they have left.

“I came into work in this community with a lot of hope, to provide services for children with after-school care and summer camp,” Jordan said. “I have seen too much harm come to this community by people from the outside.”

View the Miami Herald video news story  “The Gentrification Of The West Grove, Explained By A Local Pastor” below.