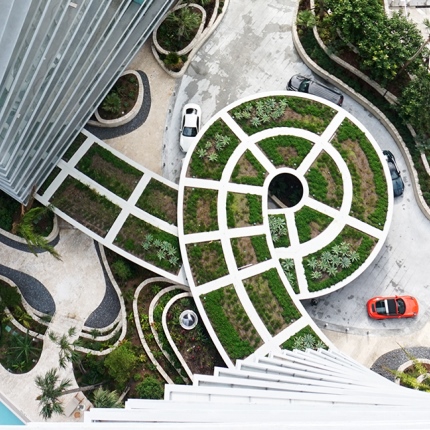 Offering panoramic views of Biscayne Bay and the Miami skyline, the project broke ground in 2013 and opened to residents earlier this year. On site, Bjarke Ingels led designboom on a guided tour of the newly completed building, explaining the project’s key design features.

The two 20-story structures contain a total of 98 units, topped with dual level penthouses. Other amenities include a total of seven pools, a spa and fitness center, and an on-site art gallery.

“David Martin (president, co-founder of Terra) drove me around Coconut Grove and showed me all the streets and tunnels through the canopy of this extremely large vegetation,” says Bjarke Ingels, detailing the project’s origins. “Quite quickly we came up with this idea of trying to ‘re-grove the grove’. The idea is that you arrive inside a grove with the shadow coming from the canopy of trees. All the landscape that is out there, six months ago, none of it was here. It is pretty insane how quickly it took root. I’m pretty sure that in another six months, it will feel like it was always here. We worked with landscape architect Raymond Jungles, who provided all these amazing plants. I think there are hundreds of different species — he totally broke the bank with the amount of vegetation!”

“As soon as you come out of the canopy, all of the first floor units have a view over the greenery, but it is the amazing view of the bay that you really want to capture,” continues Ingels. “We tried to keep things as simple as possible, so all the units are 12 feet tall — the tallest hurricane-proof sliding door you can get and you have this very elegant glass façade.”

“For the core we had a little bit more of a challenge,” Ingels continues. “We had a concrete expert from Munich, who made his career restoring Gothic cathedrals, but now he comes and he makes concrete look like raw concrete! In a way, we tried to combine our own Scandinavian tendency for simplicity with local materials. The stone is incredibly porous, which means it weathers quite quickly, and it allows greenery to take hold. the building is brand new, but it almost looks like it has always been here.”

Both structures twist at a 38-degree angle, optimizing views from the 12-foot deep wraparound balconies.

“The floor plans are rectangular and straight forward. the way that the site is positioned, there had to be two buildings. one would be close to the water, and one would be further from the water,” the Danish architect explains. “However, we didn’t want to have the front building and the back building. so we actually minimized the width of the front building so the building next to it has uninterrupted views. Then as they rise, they actually turn, and, instead of being front and back, they become side by side. they look straight out towards the bay and the skyline over downtown miami. in that sense, the turning made the two buildings equals.”

Adhering to Scandinavian instincts, BIG sought to make the building’s materials and finishes as straightforward as possible — using concrete for both the structure’s core and supporting columns.

Residences boast 12-foot high ceilings, with full-length glass sliding doors that open out to the spacious terraces. For the project’s interiors, BIG worked alongside Mexican designer Héctor Esrawe — a collaboration that Ingels says helped bind his own Scandinavian style with a more Latin American aesthetic.

The towers’ floor plates rotate three feet at every elevation from the third to the 17th floors and extend on all sides creating generous balconies for all the units. the overhanging elements act as brise-soleils, providing shade for the floor-to- ceiling windows of each residence.

In order to tackle the structural challenges presented by the design, BIG worked closely with Vincent Desimone, a renowned engineer who recently passed away.

“Vincent came up with this brilliant idea that all of the lateral loads — all the twisting that comes from the building turning — is taken by the core,” continues Ingels. “The core actually contains two inches of steel within the bottom 12 floors. essentially, all of the horizontal loads are taken by the only thing that is vertical, and all of the vertical loads are taken by the members that are diagonal — so nothing is really what it seems. the result is something that makes this rather acrobatic move seem quite effortless.”

The development sits on a parking lot, which is elegantly hidden below grade.

Terra CEO Pedro Martin adds, “A sanctuary for artists, writers and unconventional thinkers, the Grove has a long history of challenging the status quo—in the same way, Grove at Grand Bay is changing the way Miami thinks about design. We planned and developed this building with the goal of adding value to our neighborhood, so we’re proud that Coconut Grove is enjoying a resurgence while remaining mindful of its colorful past.”

Grove at Grand Bay is a $400 million project that has sold out. The project has been recognized with a number of honors and awards for its achievements in development, construction quality, and engineering excellence, including the National Council of Structural Engineers Association’s (NCSEA) 2015 Excellence in Structural Engineering Award, the Concrete Industry Board’s (CIB) 2015 Award of Merit, and the American Council of Engineering Companies (ACEC) of NY’s 2016 Engineering Excellence Awards.