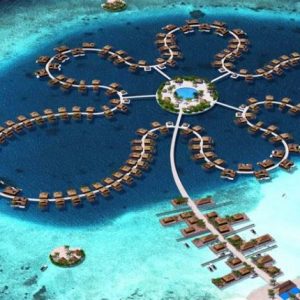 Most of Miami-Dade is already built on fake land created by draining swamps or dredging up dirt, so maybe it’s not ridiculous to think the next step for expansion is building a floating city on completely synthetic terrain.

A Dutch company hopes to make it a reality. And execs have already had talks with Mayor Carlos Gimenez about the possibility of leasing out the equivalent of 500 to 1,000 acres in the middle of Biscayne Bay.

Dutch Docklands has already built one floating community, the Ocean Flower in the Maldives, and, according to Miami Today, is looking to expand worldwide. Miami is already at the top of the list for possible U.S. expansion (though areas in New York and New Jersey are also being considered). The company already even has an office here and has met with Gimenez twice.

“You can create whole new communities, and because it’s floating and on the waterfront, it would mean very high-end real estate. You can create private beaches, private islands,” Frank Behrens, chairman of the Dutch Chamber of Commerce in Miami, told Miami Today.

Behrens said the company could close a deal as early as this week.

Maybe the idea isn’t as ridiculous as it seems at first take. Most of the islands in Biscayne Bay, including exclusive real estate hot spots such as Star Island, were created by dredging up dirt, and any floating real estate would be by its nature resistant to rising sea levels, unlike much of the rest of town.