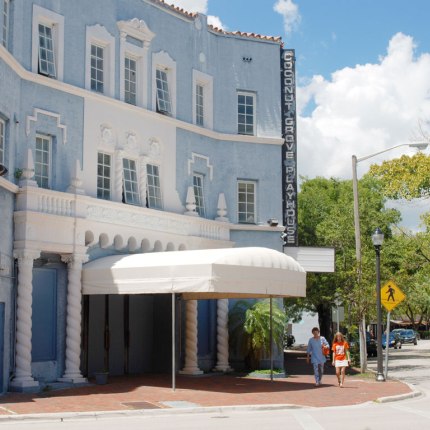 The 3rd District Court of Appeal revived a 2019 county lawsuit that seeks to overturn Miami Mayor Francis Suarez’s veto of its plan, controversial among some preservationists and Grove activists, to redevelop the publicly owned 1927 playhouse. The plan calls for demolishing the theater’s obsolete auditorium and restoring its famed Mediterranean front section, while building a new, smaller stand-alone theater behind it.

A three-judge DCA panel, in a decision issued Dec. 23, ruled that a lower court erred in dismissing the county’s lawsuit without considering its merits after concluding it had no authority to hear the case. The DCA opinion puts the unresolved question of whether the mayor’s veto was proper back before the Miami-Dade circuit court’s appellate division.

The 23-page DCA ruling says the lower appellate tribunal does in fact have jurisdiction because the Suarez veto was a “quasi-judicial” action subject to court review. The DCA sent the case back to the lower court, calling its dismissal of the county suit “a miscarriage of justice.”

Barring other developments, that means the circuit court must now consider the county’s argument that Suarez had no factual or legal basis for the veto of a narrow city commission vote that effectively gave Miami-Dade a green light for its plan.

Suarez’s action came after a prolonged and convoluted series of back-and-forth votes by the city’s historic preservation board and commission and one previous court case against the city that the county won.

“We are delighted that we are back on course and can have the merits of our case heard,” said county cultural affairs director Michael Spring, who has spearheaded the playhouse plan.

Miami City Attorney Victoria Méndez declined to comment. A spokeswoman for Suarez said Tuesday he was out of town and unavailable.

The county shares control of the Grove Playhouse with Florida International University under a long-term lease agreement with the state of Florida, which owns the property. The playhouse has been closed since 2006 when the nonprofit managing it ran into financial trouble.

Auditorium size is the issue

The city must approve any renovation plan for the playhouse because the 1927 building is a designated city historic landmark. The main sticking point has been the auditorium, which the county says is too large to be financially successful and unsuited for modern live theater.

Even though the city’s historic designation covers the footprint of the entire theater, it explicitly excludes the theater’s interior, which was altered repeatedly over the years and lost historic integrity though it retains some original features.

But Suarez in his veto message echoed some preservationists in arguing the playhouse would lose too much of its historic value if the auditorium is demolished.

In its lawsuit, the county argues Suarez had no basis for vetoing the plan because the city’s own designation report intentionally did not protect it. The auditorium’s enormous, undecorated shell has no distinguishing architectural or historic features.

Suarez also took aim at the county’s plan to finance the redevelopment, suggesting it was deceptive. The county has set aside more than $20 million to build the new theater, which was designed by Grove-based Arquitectonica, while the city parking authority agreed to build a long-sought garage with ground-floor retail on the playhouse’s extensive parking lot.

Parking revenue would support theater operations and cover the renovation of the playhouse’s front, which would be a stand-alone structure containing offices and shop spaces.