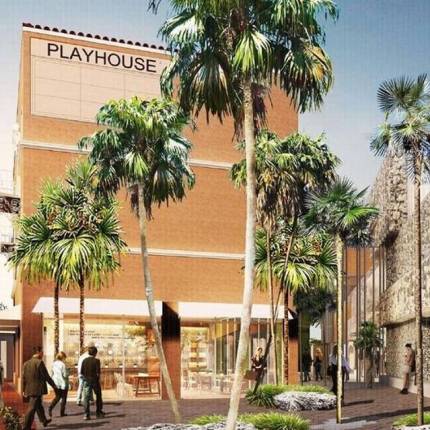 A controversial, years-in-the-making plan to reopen the Coconut Grove Playhouse appears to have been abruptly derailed by Miami commissioners.

The commission’s 3-2 vote, which came at 9 p.m. Thursday after an odd and confounding hearing, casts new uncertainty over when the playhouse, closed for 11 years, will host live theater again.

Acting on a motion by Commissioner Ken Russell, the commission essentially upended an in-progress $20 million Miami-Dade County plan that hinged on demolition of the playhouse’s deteriorated 1,100-seat auditorium and its replacement with a modern 300-seat theater — a size that backers and county officials say would be financially feasible to build and operate without heavy public subsidies. The abrupt closure of the theater a decade ago was blamed in large part on the inability of its private operators to fill its large auditorium, originally designed as a silent movie house.

Without explicitly doing so, Russell’s motion embraces instead a rival, unofficial and unfunded concept pushed by private arts patron and lawyer Mike Eidson for a larger theater within the shell of the preserved, existing auditorium — something the county’s experts have stated repeatedly is likely unworkable. Eidson, who has no fleshed-out plan or money in hand, estimates his 700-seat version would cost at least $48 million to build, though he contends he has received millions in pledges and can raise the balance of the money quickly. Eidson is also counting on the county’s $20 million in bond money for the project.

“That shell is what we’re going to have to preserve,” Russell said during the hearing. “If not, we cannot with a straight face say, “Welcome to the historic Coconut Grove Playhouse.”

The matter before commissioners was not the playhouse restoration plan itself, but an appeal by two Grove residents of the city preservation board’s provisional approval earlier this year of the demolition and renovation blueprint. The city otherwise has no direct jurisdiction over the county’s plan. The plan was developed by the county in conjunction with Florida International University, which leased the playhouse property at a nominal rent from the state under an agreement to build a 300-seat theater, and GableStage, a noted local theater company that would run it.

Russell’s motion instead retroactively placed “conditions” on the preservation board’s decision, in what seems to be an effort to force Miami-Dade Mayor Carlos Gimenez to accept the city’s and Eidson’s alternate vision. Those conditions include a 600-seat theater that would sit within the fully restored playhouse auditorium building. The motion also sets 90 days as a deadline for the balance of the needed money to be secured.

The commission vote came in spite of warnings from Spring that Gimenez was troubled by Russell’s conditions. Spring contends the 600-seat theater idea would significantly raise operational and construction costs and would likely prove financially and practically unrealistic, risking repeating the saga of the playhouse’s failure.

“Requiring us to save the shell condemns us to investing a lot of money into a theater that won’t work,” Spring told commissioners as he pleaded with them not to undermine the county plan.

Even if it were viable, he said, doing what Russell asks would mean starting from scratch, portending significant further delays. The county’s architects are halfway through construction drawings for the project, and the county hoped to break ground next year. He also noted that Eidson, who has no experience running a theater, appears to have no operational plan.

Eidson had been trying for two years to persuade Gimenez to adopt his plan but had been unsuccessful because he did not follow up on promises to raise the additional money and develop a detailed blueprint to build and operate the larger 700-seat theater he wants. In a proposed letter of understanding in which Eidson outlined his concept, the lawyer proposes that his nonprofit foundation run the theater. The letter also says the county could not audit the operation.

The decision comes amid a complicated political backdrop. Eidson has contributed $2,700 to Russell’s current campaign for Congress, and the city commissioner said in October that he hoped Eidson would help raise money for him. Meanwhile, new Miami Mayor Francis Suarez threw his support behind the idea of a larger theater during his recent campaign, after Eidson helped raise $500,000 for his mayoral bid.

Last month, Suarez’s father, Miami-Dade Commissioner Xavier Suarez, who is also calling for a larger theater, hosted a town hall meeting at which Florida Lt. Gov. Carlos Lopez-Cantera — once an enthusiastic supporter of the county’s approach — instead blasted Miami-Dade for what he alleges are delays in reopening the playhouse. Lopez-Cantera is widely believed to be planning to run for Miami-Dade mayor when Gimenez’s term is up.

At that public meeting, Gimenez said he would consider a 450-seat theater if Eidson came up with the needed money quickly and if the city contributed $10 million from voter-approved bond funds.

Russell on Thursday said the city could provide as much as $10 million toward the Eidson plan from the voter-approved bond funds, though no money has been earmarked.

Commissioner Joe Carollo, who along with Commissioner Manolo Reyes voted no on Russell’s motion, warned that many cultural groups in the city will be vying for that money. Carollo’s alternate motion, calling for a 45-day deferral on the appeal, was defeated 3-2.

The county’s plans envision full restoration of the wing-shaped, three-story Mediterranean front building that has long defined the playhouse’s presence on Main Highway in the Grove. That front was protected from demolition as a historic landmark by the city in 2005.

But the county plan also calls for full demolition of the auditorium building. The interior was not designated as historic because numerous experts concluded it had lost its original architectural integrity through substantial alterations over the years.

The renovation and demolition, approved provisionally earlier this year by the city’s historic preservation board, drew broad opposition from Grove residents and some preservationists and a legal challenge by two Grove residents. The critics argue that demolishing the auditorium, the site of many prominent theatrical productions since its conversion to live theater in the 1950s, would destroy the playhouse’s historic value.