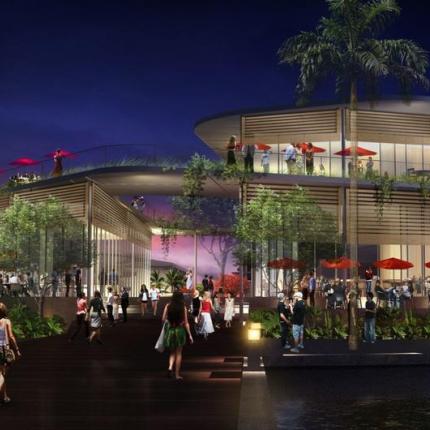 An artist rendering of Regatta Harbour, a waterfront development, on more than 9.5 acres in Coconut Grove’s historic Dinner Key. (The TREO Group/Courtesy)

Historic U.S. naval hangars that date back to the early 1900s will be transformed into a destination spot known as Regatta Harbour in Coconut Grove.

The TREO Group, a real estate investment firm, announced this week it closed on a $33 million loan provided by FirstBank Florida for the construction.

Paul George, resident historian for HistoryMiami Museum, said Dinner Key got its name because it was a popular picnicking site for residents with sailboats in the late 1800s. The U.S. Navy eventually dredged the bay to connect the island of Dinner Key to the mainland so they could use it as a Naval Air Station, he said.

The Naval Air Station that opened in 1917 was one of the first in the United States, George said. More than 1,200 pilots were trained there. The base closed in 1919.

Pan Am Airlines took over the site in 1929 and started flying seaplanes throughout the Caribbean and South America. The airline’s last flight from Dinner Key was in 1945.

Such notables as aviator Charles Lindbergh piloted Pan Am planes from Dinner Key. In 1943, President Franklin D. Roosevelt boarded a Clipper at Dinner Key to fly to the World War II summit in Casablanca, Morocco.

The Regatta Harbour plan calls for reinventing two hangars with high roofs — measuring about 40,000 square feet in total — into a possible gourmet food hall, specialty market, fitness or entertainment concept, according to a spokeswoman for the developer.

A third hangar is already in use as a Fresh Market.

The city-owned land has been a working marina. The Chart House restaurant on the site was torn down, and the Grove Bay Grill restaurant will be relocated and opened under a different name, she said.

Regatta Harbour will include marina services with dry storage slips for more than 400 vessels, an upgraded and relocated fueling station, and 700 feet of transient floating docks, the spokeswoman said. The project is expected to be completed in 2020.

George said he is thrilled the old hangars will be preserved. “That’s great,” he said. “I like the idea.”